Poll: Americans Want Republicans to Set The Agenda, Not Obama 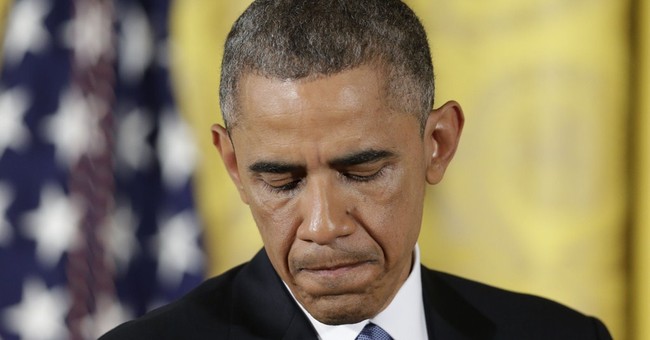 As Katie noted last week, President Obama gave little indication that he’s going to alter course regarding his agenda that sunk his party in the 2014 midterms.

"To everyone who voted I want you to know I hear you, to the two thirds of Americans chose not to participate, I hear you too,” said Obama in a less than subtle dig at Republicans by telling the they have no mandate.

As Dan wrote earlier this week, there was low voter turnout during this cycle–and it’s being used by liberals to diminish the impact of this Republican wave; a wave that led to Democrats losing the Senate, failing to retake the House, and losing governorships in deep blue states.

Right now, the GOP has not controlled this many state legislatures since 1920. Nearly 50 percent of the population lives in states where the GOP controls the state legislature and the executive.

So, how do folks feel about this new Red America? According to Gallup, 53 percent want the GOP Congress to have more influence than Obama:

Following the midterm election that some have termed a Republican wave, the majority of Americans want the Republicans in Congress -- rather than President Barack Obama -- to have more influence over the direction the country takes in the coming year. This is a switch from early 2012 when a slim plurality, 46%, wanted Obama to prevail in steering the nation.

Republicans' 17-percentage-point edge over Obama on this measure exceeds what they earned after the 2010 midterm, when Americans favored Republicans by an eight-point margin (49% to 41%). It also eclipses the nine-point advantage Republicans had over Bill Clinton following the 1994 midterm in which Republicans captured the majority of both houses.

The midterm election provided a clear signal as to which party voters want to control Congress. That message is echoed in the results of the latest Gallup poll showing Americans expressly asking for the Republicans -- rather than Obama -- to guide the direction the country takes in the next year. But, after four years of partisan gridlock, most Americans are not optimistic that the election's outcome will improve things.

Lastly, 34 percent say the country will be better off with Republicans in charge of Congress; 19 percent said we’re going to be worse off; and 44 percent said it wouldn’t make a difference.

The only question is will Obama get that his brand, his policies, and his presidency were rejected last week? I would not bet the mortgage on it, but Senator Obama might agree that 2014 was a clear message that Democrats and their policies aren’t working.

After all, in the wake of 2006 midterms that brought upon a Democratic Congress, he made such sentiments about Republican losses.