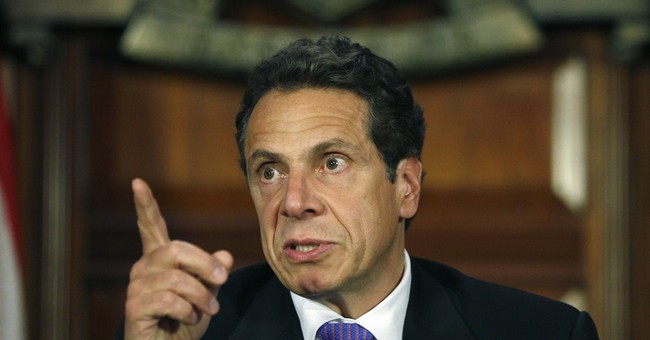 It’s just one of those awkward moments. Gov. Cuomo established the Moreland Commission to investigate corruption in state politics, only to find out that a media firm that benefited his campaign had been implicated in campaign finance violations. The commission was dishing out subpoenas, so what did he do? His office hobbled the commission, and then straight up shut it down (via NYT):

Gov. Andrew M. Cuomo set up a high-powered commission last summer to root out corruption in state politics. It was barely two months old when its investigators, hunting for violations of campaign-finance laws, issued a subpoena to a media-buying firm that had placed millions of dollars’ worth of advertisements for the New York State Democratic Party.

The investigators did not realize that the firm, Buying Time, also counted Mr. Cuomo among its clients, having bought the airtime for his campaign when he ran for governor in 2010.

Word that the subpoena had been served quickly reached Mr. Cuomo’s most senior aide, Lawrence S. Schwartz. He called one of the commission’s three co-chairs, William J. Fitzpatrick, the district attorney in Syracuse.

“This is wrong,” Mr. Schwartz said, according to Mr. Fitzpatrick, whose account was corroborated by three other people told about the call at the time. He said the firm worked for the governor, and issued a simple directive:

The subpoena was swiftly withdrawn. The panel’s chief investigator explained why in an email to the two other co-chairs later that afternoon.

“They apparently produced ads for the governor,” she wrote.

The pulled-back subpoena was the most flagrant example of how the commission, established with great ceremony by Mr. Cuomo in July 2013, was hobbled almost from the outset by demands from the governor’s office.

Oh, but it gets worse. The Moreland Commission’s executive director, Regina Calcaterra and its chief of investigations, E. Danya Perry, did not get along at all.

The first bout came when Perry wanted to investigate the Real Estate Board of New York’s political donations. These were some of Gov. Cuomo’s biggest supporters. Calcaterra told Perry not to serve the subpoena, even though the board approved it; the Governor’s Office later killed it, according to the Times.

Things got so bad that investigators began to suspect that Calcaterra, who has a long history within Democratic politics, was allegedly spying on them, providing color commentary to the NY Governor’s Office:

A sense of paranoia spread through the office, where, one staff member said, the mood began to resemble that of a prison camp. Ms. Perry told investigators to assume that Ms. Calcaterra was indeed reading their emails. One investigator told colleagues he had become convinced that it was true after Ms. Calcaterra asked him about something he had mentioned only once, in a message he had emailed from his Moreland account to his personal account.

Investigators began keeping files on their laptops rather than on a shared drive, several staff members said, so that Ms. Calcaterra would not be able to gain access to them.

Ms. Perry was asked to give an update on investigations. Prompted by one of the co-chairs, she began to detail some of the obstacles she and her investigators faced, attendees said: The governor’s office was editing letters, telling her what subpoenas she could not issue and dictating what investigative avenues she could not pursue. Her voice cracked with emotion.

And Ms. Calcaterra typed away furiously on her BlackBerry.

The Times piece is a lengthy read, but typical of the less than ethical dynamics within the halls of state governments in the Tri-state area.

In New Jersey, senior staffers from Governor Chris Christie’s office were allegedly involved in some politically motivated lane closures on the George Washington Bridge. The media saw there was blood in the water and “Bridgegate” was born.

Yet, in New York, we have a sordid history of interference from the Governor’s Office on an ethics commission that Cuomo himself established in an effort to avoid causing the governor any potential embarrassment or connections to felonious activity. Right now, federal prosecutors are looking into why the Moreland Commission was shut down – and the role Governor Cuomo and his office played to that end. We shall see if the media tackles this story with the same aggressive fervor as they did with Gov. Christie.

But, I wouldn’t advise taking bets on it.