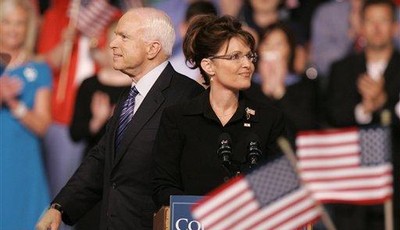 This is exactly what I would have recommended:

"It's official: Sen. John McCain will speak from a reconfigured stage in the round on Thursday night.  He'll have regular folks (delegates, I presume) behind him instead of a static background."

Let's be honest -- John McCain is much better when he is surrounded by an audience -- Town Hall meeting style.

Of course, nobody would ever dream of giving a speech where they accept the nomination of the Republican Party unless it was from behind a traditional podium (my hope is that being surrounded by an audience means McCain will give more of a town hall speech).

I mean, all the "smart" advisers would say, "Senator -- you just can't do it that way.  That's not how things are done!"

His refusal to automatically follow "conventional" wisdom (pun intended) -- and run a cookie-cutter Republican campaign -- is giving McCain a real chance to win this election.  It guided him as he picked an unconventional running mate, and it is guiding him as he makes his acceptance speech...
There's a Reason Why Most Don't Know About Joe Biden's Secret Flights
Matt Vespa