Hillary Pulls One Over on Obama Last Night 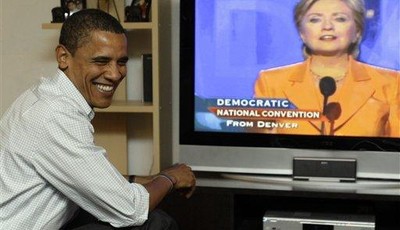 At one point, Hillary declared she, “can't wait to watch Barack Obama sign a health care plan into law that covers every single American.”

It was a strong applause line -- and the crowd reacted accordingly -- but the question remains as to whether this was a compliment or a well-hidden criticism of his health care plan.

According to the Boston Globe, during the primary campaign, Clinton “argued that Obama's plan would leave uninsured as many as 15 million of the estimated 47 million Americans without coverage ...

Also, during that month, Clinton said in the CNN YouTube debate that “the most important thing here is to level with the American people. Senator Obama’s health care plan does not cover everyone.”

Almost nobody has picked up on this possible slight.  New York Times' Maureen Dowd did subtly note in her column today that Hillary,  “thanked her ‘sisterhood of the traveling pantsuits,’ and slyly noted that Obama would enact her health care plan rather than his.”

If Hillary Clinton is still advocating for her own plan even when she is not the nominee and Obama is accidentally introducing Joe Biden as the next President of the United States, if Obama wins this election, what he is actually going to do if he is elected President?

Spend his days in the gym?