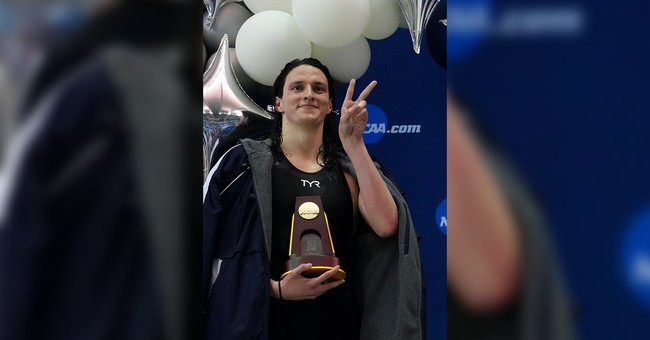 On Friday, the World Swimming Coaches Association (WSCA) released its official position on transgender athletes. This comes after biological male swimmer Will “Lia” Thomas made headlines for competing on the women’s swim team at University of Pennsylvania after competing on the men’s team for three consecutive years. At the NCAA women’s swimming championships in March, Thomas came in first place in a race against female swimmers, as Townhall covered.

The WSCA’s position is that the “grounds of fairness” in swimming cannot be maintained with the inclusion of transgender athletes in women's sports. This was published in a lengthy statement on the organization’s website.

For the sport of swimming, the inclusion of transgender people on the grounds of fairness cannot co-exist in the current competitive model. Swimming should choose to offer competition in which the female category is protected for reasons of competitive  fairness.

In many deliberations that are currently taking place within sports, the concept of an ‘Open’ division is touted widely – one where Biological Males and Transgender Females would race in one division or categorization. However, there is a view that the use of an ‘Open’ option merely ‘puts the Trans problem away’. With an Open division, Trans females swimming against biological males may not even make the required time standards to be able to enter certain events/meets. Additionally, Trans males competing against biological males does not raise a concern in terms of performance imbalance within the biological sexes. An Open competition takes care of the issue we face, but we also have to ask if it takes care of the athletes holistically.

The statement went on to explain that events like the Special Olympics and Paralympics have derived over time to recognize “biological differences” in athletes. The organization argued that this model should be followed to include transgender athletes in competitive sports, including swimming.

There is an argument for needing to follow this path when advocating for our Trans athletes – to start with the question ‘What is the biological difference?’ If we do that, we could create a Trans Division, a Trans Meet, or even a Trans Games, but we would start small with a Trans Division.

Trans females cannot compete fairly with biological females; however, providing them with the competition that is predominantly that of competing against biological males becomes unfair to the Trans female. It is the exact mirror image for the Trans Male. He has the same biologic disadvantage that the trans female has as an advantage. Yet forcing him onto a female’s division would in many cases (and in the least) violate our doping rules.

One such solution is to create a Trans Division. The Trans Females will race each other. The Trans Males will race each other. There is an argument that the Trans Males have been completely lost in this debate because they are uncompetitive in our current structure. This would also allow those of indeterminate gender to be factored into such a solution.

Our role as coaches is not to decide if the athlete is ready for transitioning or if they should transition. That is up to them, their parents, and their physicians. Our role is to help them swim faster and develop lifetime health and fitness habits…If we want to protect female sports, grow our sport, and create fair competitions, there is a strong argument that we need to follow the path of history and create a new division for such Trans athletes.

“I don’t think biological boys should compete in women’s sports – we have to protect women’s sports… that’s the bottom line,” Jenner told the Daily Mail.

“I play golf and, seven years after my transition, I still have a big advantage over women players. I'm 6ft 1in. I have longer arms than the ladies and I can outdrive them by a hundred yards,” Jenner added in the interview. “Even being off testosterone and on estrogen for seven years now, what I've got left over is still more than they've ever had. So, it wouldn't be fair.”