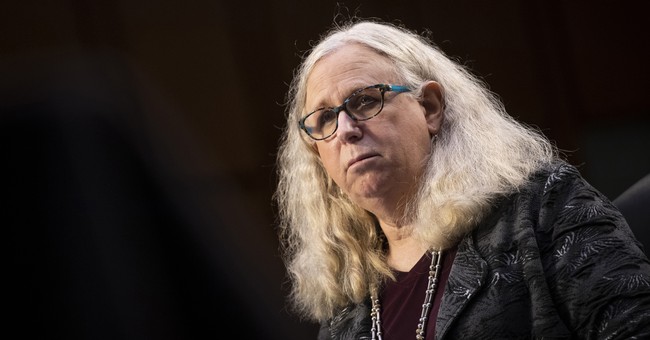 This week, USA TODAY unveiled its “Women of the Year” list, which, predictably, was dominated by woke public figures such as Simone Biles, Melinda French Gates, and Vice President Kamala Harris. But, in true “woke” fashion, one name that made the list was not a biological woman.

Dr. Rachel Levine, the U.S. Assistant Secretary for Health, made the cut for USA TODAY’s “Women of the Year.” Levine, a four-star admiral, was born a biological male, Richard Levine, and transitioned to live as a female. Previously, Levine was secretary of the Pennsylvania Department of Health.

“Levine, 64, a trained pediatrician, became the nation's highest-ranking openly transgender official last March when the Senate confirmed her as assistant secretary of health,” USA TODAY wrote. The report boasted that Levine leads a group of 6,000 uniformed public health officers on a daily basis and described Levine’s position as “crucial” during the pandemic.

"I really feel that everything I've ever done, whether it was in academic medicine, in education, in clinical research, seeing my patients in my role in public health, in Pennsylvania and now my role nationally," Levine told the outlet, "has all led to this moment in terms of helping the nation through this greatest public health crisis that we have faced in over a hundred years."

Furthermore, USA TODAY noted that one of Levine’s concerns is “about the challenges women and girls face related to body image.”

"We need to be welcoming and celebratory for women of all aspects, of all sizes and shapes," she said. "And we have to work towards that compassion for all women and not put such an emphasis on thinness and appearance. I think that we need to work as a culture in the United States, but also globally, to be more compassionate and more accepting of girls and women, no matter what their size and shape."

Later on in the interview, Levine said that “the value of diversity” is “important in our culture” and “for our country.”

Several political pundits and the like took to Twitter to point out that Levine is not a biological woman, and being named as one of the “Women of the Year” is insulting to women. Several users responded to White House Domestic Policy Advisor Susan Rice's tweet that Levine is "trailblazing."

When coming back from break and discussing @USATODAY’s “Woman of the Year,” Rachel Levine. Do I play Aretha Franklin “Natural Woman” or The Kinks “Lola”?

Congratulations, brave and beautiful, former-male Admiral Rachel Levine, for being one of USA Today's "Women of the Year" just for wearing a dress.

Rachel Levine is getting a "woman of the year" award for literally just showing up to work in a dress...

Name ANY other reason "she" would earn this award.

I believe that adults have the right to decide how to live their life, including Rachel Levine. But that doesn’t mean I have to applaud @USATODAY naming him “Women of the Year.” It’s insulting to women. https://t.co/p0plaGBnlx

Late last year, GOP Indiana Rep. Jim Banks was temporarily blocked from his Twitter account for referring to Levine as a man after Levine was recognized as the “first female four-star officer” in the U.S. Public Health Service Commissioned Corps. In an interview with The Daily Signal, Banks defended his tweet and said that Levine was taking away opportunities from women and girls.

“My tweet was simply, ‘The title of first female four-star officer gets taken by a man.’ That’s using the surgeon general’s language and Admiral Levine, when she was promoted to four-star admiral said, ‘I’m proud to be the first female four-star officer.’ My tweet, though, is a fact. It is a biological fact that Admiral Levine is a man who has taken the title of first female four-star officer away from young women and young girls all over this country who might one day hope to achieve an accomplishment being the first woman this or that,” Banks said in the interview. “Who am I talking about? I’m talking about my three daughters. I have … three daughters who are 12, 10, and 8. This is deeply offensive to me because of them, because I want them to grow up in this great country and have the opportunities to accomplish things that other people haven’t accomplished before.”