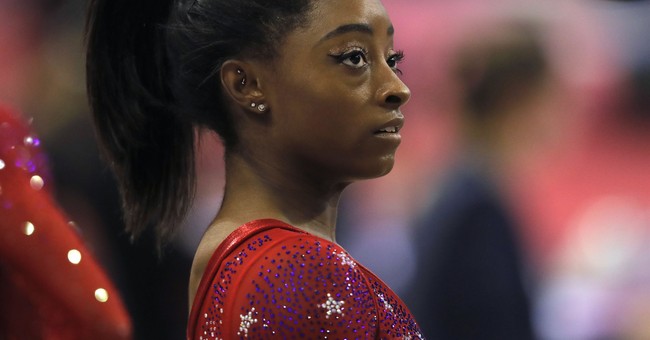 On Monday, Olympian Simone Biles took to Instagram to come out as pro-choice and attack the foster care system and adoption.

The pro-abortion comments, which were posted on Biles’ Instagram story – a feature that allows users to post content that disappears after 24 hours – came as a response to a user who submitted an “unpopular opinion” to Biles’ account per her request.

“abortion is wrong :),” the anonymous user wrote. Biles fired back in a choppy, all-over-the-place response, attacking the foster care system, adoption, and those who refused to wear masks throughout the COVID-19 pandemic. A screenshot of the exchange was posted to Twitter.

“I already know this is going to start the biggest argument & may even lose followers BUT. I’m very much pro-choice[.] [Y]our body. [Y]our choice,” Biles wrote. “[A]lso for everyone gonna say ‘just put it up for adoption’ it’s not that easy and coming from someone who was in the foster care system TRUST me foster care system is broken & it’s TOUGH. [E]specailly on the kids and young adults who age out & adoption is expensive…[I’m] just saying & don’t even come at me if you couldn’t keep a mask on or refused to wear one[.]”

On Twitter, user “@youngbluewooll1,” whose account has since been set to private, reportedly tweeted “Thoughts with all the kids in the foster care system today being told by @Simone_Biles that their lives are worth nothing and are better off dead.” Biles caught sight of the tweet and retaliated in a series of tweets, accusing the user of misconstruing her words and claiming that pro-life supporters only care about “control.”

DO NOT misconstrue my words. That is not at all what I implied. I did NOT say I support to abort rather than to put them through the foster care system. What I did imply is that you should not control someone elses body/decision. Let’s be real what you care about is control… https://t.co/IWVz0ydpXi

I have forever & will continue to support foster kids. AS I WAS ONE. I’ve been an advocate for foster kids and the system but you wouldn’t know that because you don’t follow me, you just like to open your mouth.

Conservative commentator Matt Walsh slammed Biles’ stance on abortion, noting the millions of couples waiting to adopt and her implication that abortion is better than seeking a pro-life alternative. “This is clearly meant to imply that aborting is better than putting a child up for adoption,” he tweeted. “You're quitting on your own argument  just like you quit on your team in the Olympics.”

In defending abortion you said that the foster care system is "tough" and adoption is "expensive." This is clearly meant to imply that aborting is better than putting a child up for adoption. You're quitting on your own argument just like you quit on your team in the Olympics. https://t.co/VMtR1GGRC7

By the way, there are two million couples waiting to adopt right now, most of them hoping to adopt a baby. It can be hard to place older kids if they end up in the system, but it is not at all difficult for infants to find a family. Literally millions of couples in line.