Kim Kardashian on Criticism for Working with Trump: ‘Destroy Me Then. I Really Don't Care.' 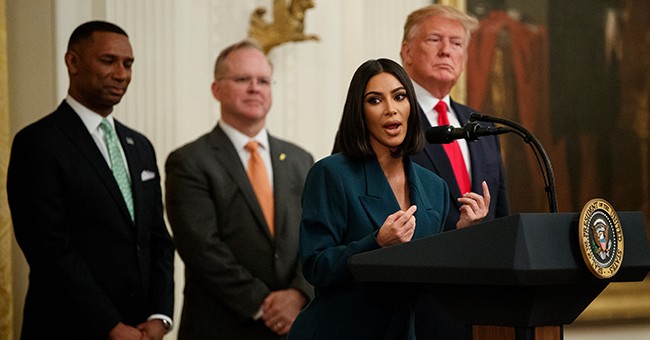 In an interview this week, media personality Kim Kardashian said that she doesn't care about the criticism she received for working with former President Trump on criminal justice reform and said that she’s a mixture of both Republican and Democrat.

Kardashian made the remarks in an interview published Thursday with former New York Times columnist Bari Weiss. In their discussion, Weiss asked Kardashian, who is currently in law school, her thoughts on politics, cancel culture, and her involvement with Trump to promote the First Step Act during his presidency.

“You were credited for helping swing Trump's support for the First Step Act, which has changed the lives of so many Americans. There were a lot of people who on the left who criticized you a lot for working with Trump, for normalizing him. What do you say to that?” Weiss asked.

The First Step Act, formally known as the Formerly Incarcerated Reenter Society Transformed Safely Transitioning Every Person Act, was signed by Trump in 2018. The Act aims to improve conditions in prisons, implement recidivism reduction programs for inmates, and reduce prison population, among other things.

“I’m just about doing the right thing; I’m really not about politics at all. It’s really about the people inside and if I can do anything — no matter if it’s Obama, Biden, Trump, I’m willing to work with anybody. It’s not really about being liked. If I could change someone's life, that’s what it’s about for me,” she added.

Later in the interview, Weiss asked Kardashian point blank, “Are you a feminist?” and followed up by asking her political affiliation.

“Speaking of titles, are you a Democrat?” Weiss pressed.

“I believe in the rights that the Democrats want, but I believe in the taxes that the Republicans want. I’m a mix of both,” Kardashian answered. She added that she does not think she will ever run for public office, noting that she understands the responsibility and that  “it’s an extremely hard job.”

In the interview, Kardashian admitted that she regrets telling her then-husband, Kanye West, not to wear a red “Make America Great Again” hat on Saturday Night Live in 2018.

“I was very nervous. I didn’t want him to wear the red hat,” Kardashian recounted. “I’m very neutral, but that night I was very forceful with him, and argued with him like, ‘You have to take that hat off.’ And now looking back, I think, why should he take that off if that’s what he believes in? Why can’t he wear that on TV? Half of the country voted for him, so clearly other people like him.”

“I learned a lot from that situation. No matter what, it taught me to be a little bit more empathetic for people that just want to do what they want to do: freedom of speech!” she added. “And if you want to wear the hat, wear the hat. I respect the fact that he knew exactly what he believed in and always stood by that. To me, that’s a good quality to have, no matter who is against you and no matter what the circumstances are. I think that it’s just admirable and it’s just a really cool quality. Even if it’s not what I agree with, or even if I would have done it differently, I think it’s commendable.”