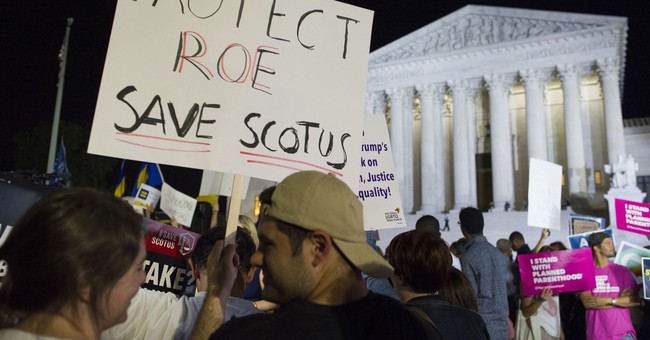 On Wednesday, hundreds of protesters gathered in front of the stairs of the United States Supreme Court as the justices heard oral arguments in the case, Dobbs v. Jackson Women’s Health Organization. Dobbs is the first Court case in decades with the potential to overturn the landmark case Roe v. Wade, which, in 1973, gave American women the right to obtain an abortion.

Dobbs, which began in 2018, surrounds a law in Mississippi that would implement a 15-week ban on most abortions in the state. As an analysis from the Charlotte Lozier Institute points out, 15-week and 12-week abortion bans are mainstream in Europe, while America’s elective abortion laws are comparable to China and North Korea, as I reported.

In front of the Court on Wednesday, pro-abortion supporters donned t-shirts, waved flags, passed out balloons, and carried signs supporting Roe and the killing of unborn children. Some signage was littered with profanity, or other slogans like “abortion is healthcare,” “abortion is essential,” “bans off our bodies,” “grow abortion power,” “stop the bans,” “vote out anti-choice politicians,” “liberate abortion,” “keep abortion legal,” “young and abortion positive,” “keep our clinics” and the Amazon logo altered to say “Abortion: How you want it. When you want it.” Not to mention, plenty of signage of the late Ruth Bader Ginsberg.

I hate profanity in my tweets. I always avoid it if I can. This is the demonic nature of what we’re dealing with, though. It’s vulgar. A lot of it also invites/incites violence. Let’s #ModernizeOurLaw, SCOTUS, with #DobbsvJackson! pic.twitter.com/6NzhAX0kD6

A block away, some pro-abortion activists took to sitting in the roadway.

Developing at the intersection of First and Constitution, a block from the Supreme Court. Dozens of abortion rights activists are risking arrest at a sit-in on the roadway. “Abortion is our legal right,” they chant. “Abortion rights are here to stay.” pic.twitter.com/hjmkOR8MeL

Meant to check in earlier. Here we are! The pro-abortion side has already mostly cleared out, as they’ve been blocked by Christian/pro-life signs. From what I’ve heard, the pro-abortion crowd has been mocking the pro-life side. Truly demonic. #DobbsvJackson. #ModernizeOurLaw pic.twitter.com/tVUtyRkXfP

Supporters of several big-name pro-abortion organizations, such as the Center for Reproductive Rights, the ACLU, and Planned Parenthood turned out. Many abortion clinic escorts and “Pink House Defenders” were present. The “pink house” refers to Jackson Women’s Health Organization, the abortion clinic at the center of the Dobbs lawsuit. It is the last remaining abortion clinic in Mississippi and is painted “bubblegum pink.”

As Julio covered, protestors from the organization Shout Your Abortion collectively took abortion pills outside the Supreme Court. And during the rally, pro-abortion chants like “abortion is essential” and “abortion is healthcare” erupted several times. One longer chant included the sentence, “Humans, females, we want our sex.”

Pro-Abortion supporters are complaining that the #ProLifeGen is WINNING.

Significantly more people on the pro-life side of the barricade vs. abortion supporters’ side at the Supreme Court for #DobbsvJackson. pic.twitter.com/MYPbw3IGR5