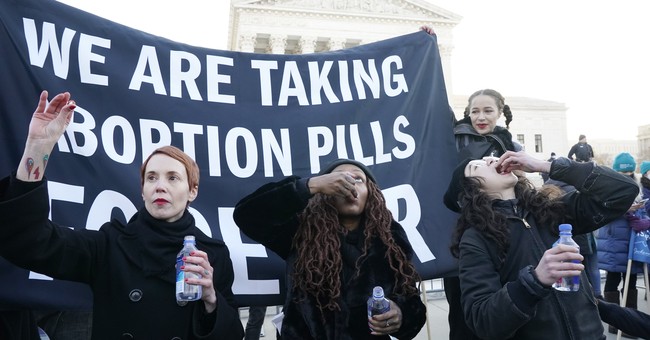 Activists with Shout Your Abortion took abortion pills outside the Supreme Court on Wednesday while standing in front of a banner that read "We are taking abortion pills forever" as the highest court in the country started oral arguments in Dobbs v. Jackson Women’s Health Organization.

Amelia Bonow told Rewire News Group the reason for focusing on abortion pills is because "relatively few people are aware that abortion pills are now widely available by mail in all 50 states, and that needs to become common knowledge ASAP.

"The Court is about to take away a 50-year-old constitutional right, in a striking example of minority rule, both in terms of the makeup of the courts and in terms of the fact that 77 percent of the population supports Roe. But looking at social media, looking at the signs in people’s yards, looking at just the lack of people in the streets, it feels like we are descending into hell, and people outside of our movement seemingly don’t have much to say about it," she added.

From reports on the ground, it appears the pro-life activists outnumbered the pro-abortion activists in the morning.

Wow. Out front of #SCOTUS

The pro-life side of the crowd sings the national anthem. pic.twitter.com/Zelc0o2HQp