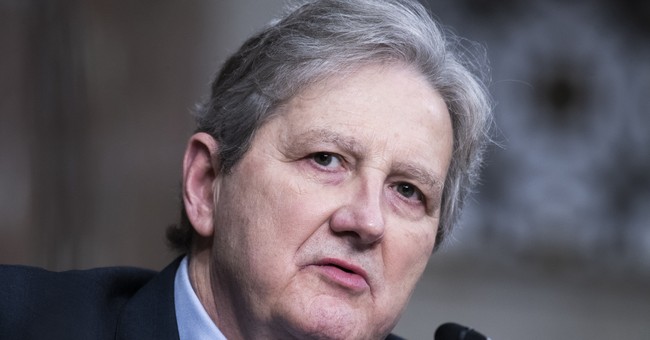 On Tuesday evening, Louisiana Sen. John Kennedy, a Republican, appeared in a Fox News interview where he attacked the Biden administration for positioning the Department of Justice (DOJ) and the FBI to go after parents who vocalize opposition to their children’s “woke” curriculum at school board meetings.

As Spencer reported last week, Attorney General Merrick Garland sent a memo to the FBI announcing a “partnership among federal, state, local, tribal, and territorial law enforcement to address threats against school administrators, boards members, teachers and staff” and a series of measures to “address the rise in criminal conduct directed toward school personnel.” This memo came in response to a National School Board Association letter to President Biden claiming parental opposition to Wuhan coronavirus mandates and ideology, such as CRT, "could be the equivalent to a form of domestic terrorism and hate crimes."

In the interview, Kennedy lambasted the Biden administration’s approach to eliminate parental involvement from children’s lives and the repercussions of doing so.

“The President has decided to sic the FBI on parents. Now, most Americans understand that one of the reasons that we have crime problems in America is because of the lack of parental involvement in kid’s lives. We have thousands of kids who are more likely to grow up and go to prison than get married and own a home. So, we want to encourage parental involvement. Parents have been taking an interest in their kid’s education, going to school board meetings. What is President Biden’s response? Well, let’s sic the FBI on them. Now, I’m not defending anybody that acts outrageously at a school board, but that's only a small minority of cases. The President is basically saying to the American people ‘you don’t have a say in your kid’s lives and what they learn.’ And common sense may be illegal in Washington, but it’s not illegal in most of America,” Kennedy said in the segment.

At another point in the interview, as Spencer reported, Kennedy discussed Biden’s polling numbers, comparing them to a ‘“fat guy on a seesaw.” There’s been no shortage of coverage at Townhall regarding Biden’s tanking approval rating. And with his latest attack on parents, it’s bound to plummet further.

Pres. Biden’s response to parents taking an interest in their kids' education is to sic the FBI on them. File that under "things that make no sense." pic.twitter.com/RMSArVh87I