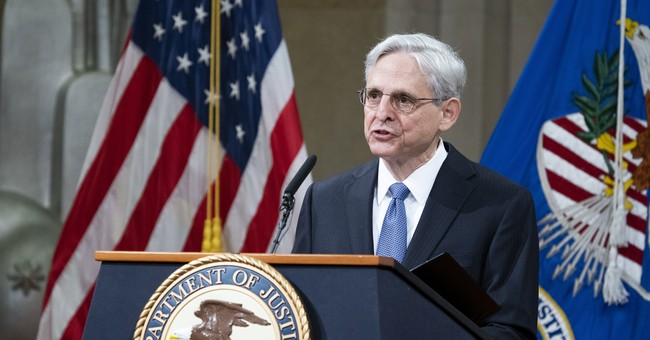 United States Attorney General Merrick Garland is taking action aimed at addressing the growing number of showdowns taking place between concerned parents and local school administrators over the implementation of critical race theory and other radical leftist curricula and policies.

In a memo sent from Garland to the FBI director and United States attorneys on Monday, Biden's attorney general announced a "partnership among federal, state, local, tribal, and territorial law enforcement to address threats against school administrators, board members, teachers and staff."

Garland's memo also teases "a series of measures designed to address the rise in criminal conduct directed toward school personnel" in the Biden administration's response to a National School Boards Association letter claiming parental opposition to school mandates and woke ideology "could be the equivalent to a form of domestic terrorism and hate crimes."

Ignoring numerous instances in which parents have been stopped from speaking out against school board attempts to implement woke programs for their children, Garland attacks parents with an overly broad brush saying "there has been a disturbing spike in harassment, intimidation, and threats of violence against school administrators, board members, teachers, and staff who participate in the vital work of running our nation's public schools."

The letter follows the National School Board Association's request to classify protests as "domestic terrorism." pic.twitter.com/NhPU03YOYq

"Where spirited debate about policy matters is protected under our Constitution, that protection does not extend to threats of violence or efforts to intimidate individuals based on their views," Garland notes in his memo. "The Department takes these incidents seriously and is committed to using its authority and resources to discourage these threats, identify them when they occur, and prosecute them when appropriate."

I am directing the Federal Bureau of Investigation, working with each United States Attorney, to convene meetings with federal, state, local, Tribal, and territorial leaders in each federal judicial district within 30 days of the issuance of this memorandum. These meetings will facilitate the discussion of strategies for addressing threats against school administrators, board members, teachers, and staff, and will open dedicated lines of communication for threat reporting, assessment, and response.

The Department of Justice is steadfast in its commitment to protect all people in the United States from violence, threats of violence, and other forms of intimidation and harassment.

As Townhall covered on Monday, the FBI recently admitted that they "don’t categorize Antifa, nor do we calculate or collate information regarding Antifa," something it refers to merely as a "movement," but now the Attorney General is instructing the FBI and other state and local law enforcement to go after parents based on the accusation that parental outcry over educators' attempt to push families out of their own kids' education is domestic terrorism.

Any illegal activity should be prosecuted to the fullest extent of the law already, but the Biden administration acting at the behest of a woke association is sure to abuse its authority and have a chilling effect on parental involvement in the education of their children. Garland's memo does not explain what it will classify as a "threat" or "efforts to intimidate," nor does it say whether it will follow established law to guide its handling of parents protesting school mask or vaccine mandates and critical race theory.