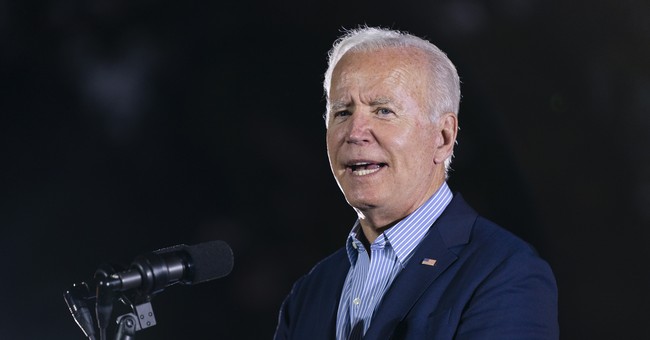 President Biden indicated to reporters on Tuesday that he would sign the Democrat’s reconciliation bill if the Hyde Amendment were included, the provision that prohibits taxpayer dollars from funding abortions.

“I’d sign it either way, because the Hyde Amendment is….anyway” Biden told reporters on Tuesday when asked if he would sign the bill if the Hyde Amendment were included. As we’ve reported, Biden supported the amendment up until 2019 after announcing his bid for president. He has since come out against it. And, this year, Biden excluded the Hyde Amendment from the 2022 budget, though it had been signed into law by every president, Republican and Democrat, since President Carter.

REPORTER: Are you OK if the Hyde Amendment is in the reconciliation bill?

BIDEN: … I want to get the bill passed.

REPORTER: Would you sign it if the Hyde Amendment is in [the bill]?

Last week, Democratic Sen. Joe Manchin (WV), who is pro-life, told the National Review that the reconciliation bill is “dead on arrival” without the Hyde Amendment.

On the contrary, Rep. Pramila Jayapal (WA), who is the chair of the Congressional Progressive Caucus, said in an interview with CNN’s Dana Bush for “State of the Union” that she would not vote for a reconciliation bill that includes the Hyde Amendment. Last week, Jayapal shared her abortion experience in a House Oversight hearing on abortion-restricting laws popping up across the country.

In a press conference on Monday, Press Secretary Jen Psaki reiterated Biden’s opposition to the Hyde Amendment, but said “I'm not going to negotiate the package from here.” Currently, no Republicans are expected to support the package.