Hiker Claims He Encountered Brian Laundrie on the Appalachian Trail 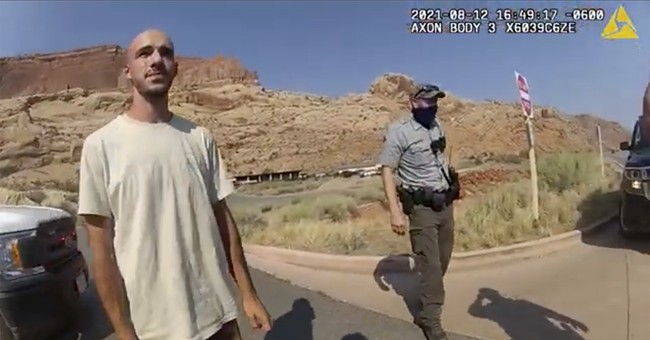 In an interview with Fox News on Monday, a hiker named Dennis Davis called in and shared how he encountered Brian Laundrie in a vehicle near the North Carolina-Tennessee border this past weekend.

As we previously reported, Laundrie, 23, was named a person of interest in the death of 22-year-old Gabby Petito. Petito and Laundrie, who were previously engaged to be married, set out on a cross-country road trip excursion living out of a van in July. In late August, Petito’s family lost touch with her. The last text message Petito’s mother received from her daughter was on August 30.

On Sept. 1, Laundrie reportedly returned home to North Port, Florida with Petito’s van, though she was not with him. Petito’s family reported her missing on September 11. When police approached the Laundrie residence that evening, the parents handed them the contact information for their lawyer. Laundrie was named a person of interest on September 15.

On September 17, Laundrie’s parents reported their son missing. Searches for Petito and Laundrie were underway. On September 19, a body believed to be Petito’s was found in Wyoming. On September 21, an autopsy confirmed that the remains found were Petito’s her death was ruled a homicide. The search for Laundrie continued with new urgency in Florida, so far to no avail.

Now, according to Davis' interview with Fox News, Laundrie may be as far away as the North Carolina-Tennessee border. Davis claims he “absolutely 100 percent” believes the individual he saw while hiking was Brian Laundrie.

“I drove up to the North Carolina-Tennessee border on Friday night coming up from Florida. And, I got there about 12:30 a.m. on Saturday morning. I was parking my car at a parking lot where we were going to end our trip at the end of the week. And it was called the Davenport Gas. As I was parking there, I actually went past the parking lot, I saw it in the rearview mirror. I was doing a three-point turn in the road – it was a very narrow, country road – so I made the turn, and as I was coming back toward the parking lot, another vehicle was coming towards me. They flashed their lights and the gentleman waved his hand at me. So, I stopped and we spoke. We were side-by-side, our cars. He was in a pickup truck sitting right next to me. As soon as I looked at him, he looked like he was messed up or something. But, it took him a minute to ask me anything and he looked at me and he said ‘Man, I’m lost,’” Davis explained in the interview.

Davis then said that the man he believes to be Laundrie asked him for directions to get to California, saying that his girlfriend loves him and he had to go out there to see her. Davis told the man to take I-40 to California, to which the man responded by saying he was going to stay on the road he was currently on.

“I drove my car and I was heading west on I-40 and all of a sudden it kind of dawned on me, ‘what if that was that guy?’” Davis continued. He pulled over at the next exit and pulled up a photo of Laundrie on his phone.

“Right at that minute I said, ‘that is absolutely him,’” Davis said in the segment.

Davis made multiple calls to the FBI and to 911 to report the sighting. He noted that the North Carolina police sent an officer out to look for Laundrie following the report.

“It was about 3 a.m. in the morning when they finally got out there,” Davis said. The officer’s search lasted approximately 50 minutes. “They pulled over one vehicle in that time, just to see if it was him.”

Aforementioned, an FBI search for Laundrie is still underway. Last week, Duane Chapman, known as “Dog the Bounty Hunter,” announced that he is looking for Laundrie as well. Chapman said this past weekend that he has received over 2,000 calls, 20 percent of which he considers positive leads.