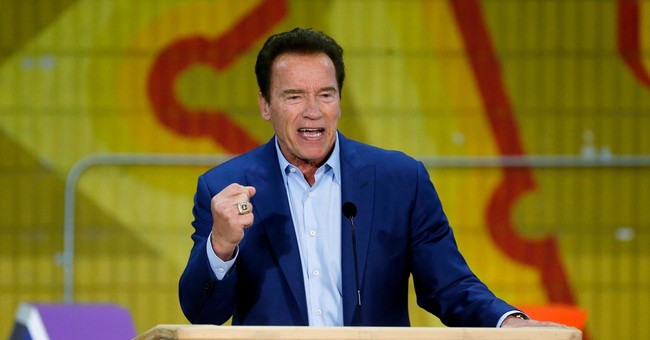 Former California Gov. Arnold Schwarzenegger defended his comment telling Americans who are against masks, “screw your freedom,” by making an analogy to obeying traffic laws.

"Because with freedom comes obligations and responsibilities," the former actor said in a discussion with CNN's Bianna Golodryga and Alexander Vindman.

"We cannot just say, 'I have the right to do X, Y and Z.' When you affect other people, that is when it gets serious," Schwarzenegger continued.

"Yeah, you have the freedom to wear no mask. But you know something, you're a schmuck for not wearing a mask because you're supposed to protect the fellow members around you," Schwarzenegger added.

"I don't want to villainize anyone here, but I just wanted to tell everyone, let's work together and let's stop fighting because there is a virus, and it's better to get vaccinated [and] to wear a mask."

Coming from a person who left Austria for Freedom in the United States!

The former governor followed up on Twitter, comparing masking to traffic laws.

“‘…because with freedom comes obligations and responsibilities.’ Like I said, pure freedom would also mean ignoring red lights, but we don’t do that because it would kill our fellow citizens,” he tweeted.

“…because with freedom comes obligations and responsibilities.” Like I said, pure freedom would also mean ignoring red lights, but we don’t do that because it would kill our fellow citizens.

Regulating how people drive on public roads is one thing, mandating we obstruct our airways with fabric is quite another.

Running a red light is breaking the law.

It's a massive false equivalence on multiple levels to compare not wearing a mask to running red lights.

This presupposes that
1) masks are effective at stopping transmission when studies show the opposite https://t.co/xuCKPX4cyihttps://t.co/UoalEt9lOAhttps://t.co/ZMG3O6yK5v
2) That a virus with a 99% survivability rate means that every positive case = fatality, also untrue. https://t.co/ASjneqxutr