Sen. Rand Paul Has a Very Good Question About the US After Venezuela’s Currency Update 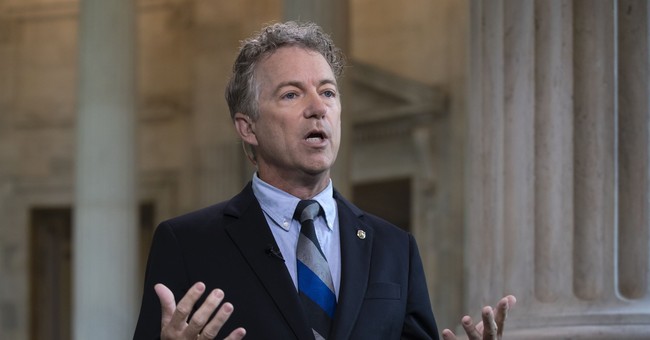 One day after the Senate passed the $1.9 trillion American Rescue Plan, Sen. Rand Paul wondered if the U.S. is following in Venezuela’s footsteps.

New 1,000,000 bolivar note in Venezuela worth 53 cents. Will US be the next Venezuela with Congress borrowing over $6 trillion in one year?

While the dollar has gained ground, Venezuelans continue to rely on bolivar bills for public transportation and to purchase subsidized fuel. The Caracas subway recently issued an electronic payment system after it routinely stopped charging passengers due to cash shortages.

President Nicolas Maduro has said he plans to move to a fully digital economy this year, following three years of hyperinflation that have prompted the nation’s mint to issue higher-denomination notes that are quickly rendered all but useless. Inflation soared 3,000% in the last 12 months, according to Bloomberg News’s Cafe con Leche Index. (Bloomberg)

The COVID-19 relief bill was blasted by Republicans, who argued only 9 percent of actually had anything to do with real COVID relief. The rest was filled with “bailouts for Democratic constituencies, expansions of progressive programs, pork, and unrelated policy changes,” according to The Wall Street Journal.

“I voted against this bill today because it could further wreck the economy and ignite inflation. This legislation includes a host of non-COVID-related left-wing policies,” Sen. Richard Shelby (R-AL) said in a statement.

Sen. Ted Cruz was also critical of the legislation.

“Instead of working in a bipartisan manner to open our schools, bring back small businesses, and help struggling Americans get back on their feet, Democrats chose to pander to their radical liberal base with partisan handouts,” Cruz said in a statement.

“This bill is stuffed with pork, with only nine percent of the almost $2 trillion going toward actual and urgent COVID relief,” he continued, noting that the legislation “shockingly provides COVID relief checks to illegal aliens and criminals behind bars.”

“I proposed two amendments to close these loopholes. Democrats voted in lockstep to ensure illegal aliens and prison inmates would still qualify for these rebates,” he added.

Pointing out just some of the unrelated spending in the bill, the National Republican Senatorial Committee said, "It’s clear. The American people called for targeted relief, but Senate Democrats delivered their far left, radical wish list instead."

#ICYMI: Yesterday @SenateDems pushed through their so-called “COVID relief” bill full of wasteful spending to bail out blue states and fund for their liberal pet projects.