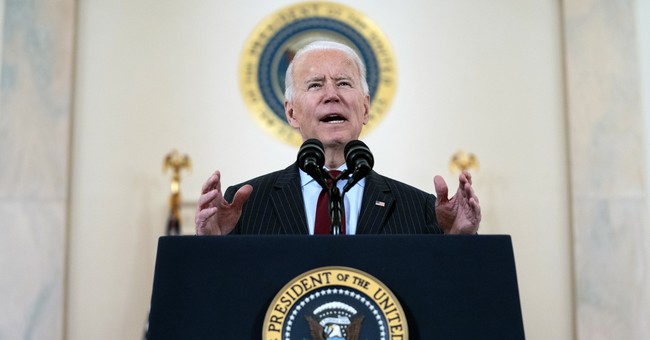 White House Press Secretary Jen Psaki announced Monday that President Biden will deliver his first primetime address on Thursday, marking one year since the novel coronavirus shutdown much of the country.

"The President will deliver his first primetime address to commemorate the one-year anniversary of the Covid-19 shutdown on Thursday,” she said during Monday’s briefing. “He will discuss the many sacrifices the American people have made over the last year and the grave loss communities and families across the country have suffered.”

Biden, she added, will highlight “the role that Americans will play in beating the virus and moving the country toward getting back to normal."

PSAKI: "The president will deliver his first primetime address to commemorate the one year anniversary of the COVID-19 shutdown on Thursday." pic.twitter.com/32OKLqnuy2

The announcement comes as the House is expected to vote for final passage of the $1.9 trillion American Rescue Plan, which has much more pork, bailouts, and liberal policies than actual Covid relief.  The vote could come as early as Tuesday, and then it will be sent to Biden’s desk for signing.

Later in the briefing Psaki called the pandemic the "No. 1 issue and priority on the mind of the president, vice president and our entire team."

She added: "The American people know that the reason why we have a recession, the reason why so many families are concerned about putting food on the table, the reason why parents around the country are worried about the impact of closed schools on their kids' mental health and their learning is because of the pandemic."