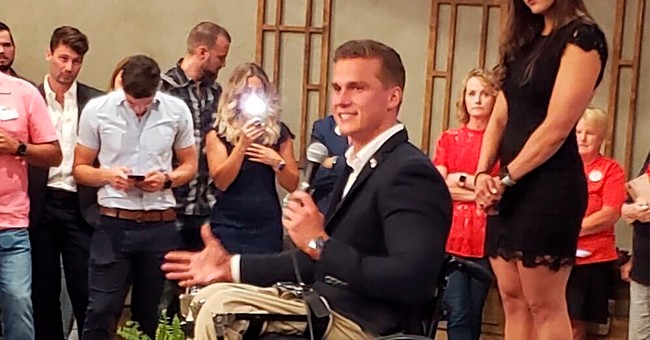 Cawthorn, the CEO of a real estate investment company and motivational speaker, received more than 65 percent of the vote despite the fact that Bennett, in addition to the president’s backing, had the support of Meadows and Sen. Ted Cruz.

Cawthorn had Mark Meadows as his speech and debate coach in high school and now he’s beat the candidate that Meadows and Trump endorsed against him. https://t.co/HPZVaUchr1

Cawthorn’s campaign slogan is “send a fighter to Congress” because of the many challenges he’s overcome—most significantly a horrible 2014 car accident on his way to the U.S. Naval Academy (which he was nominated to by Meadows) that left him partially paralyzed and in a wheelchair.

Cawthorn had been reclining with his legs up when they crashed, and the force of the impact snapped his spine. The accident burned him, shattered his ankle, broke his pelvis, and cost him a kidney. His internal organs were pushed up into his chest, crushing his lungs. "Both my lungs collapsed, so I couldn't speak for a very long time," he said, recalling how he learned to communicate with sign language. Only his head escaped injury. The doctors were amazed he survived. (The Washington Examiner)

On his campaign website, Cawthorn says his “spirit, determination, faith, and courage have been tested in ways very few will ever face,” and it’s prepared him to take on Democrats in Congress.

Western North Carolina deserves a Representative that is willing to fight for you.

My opponent has continually dodged and avoided debate invites from myself and the GOP. What is she afraid of? pic.twitter.com/i3z4t6otTP

He will turn 25, the constitutionally-mandated age to serve in the U.S. House of Representatives, in August. If he wins, he’ll be the youngest member of the lower chamber—and he sees that as a positive.

"I have had the misfortune of not being on this earth as long as my opponent has been," he told The Washington Examiner. "But I don't think that's a weakness. I think it gives me a vigor, it gives me a fire, and it gives me a fight that you're not going to see in someone who is going to rest on their laurels and say, 'Oh, I'm successful.'"

Though some thought his win over “Bennett” would anger the president, Cawthorn supports him.

“his win is going to piss off Trump”