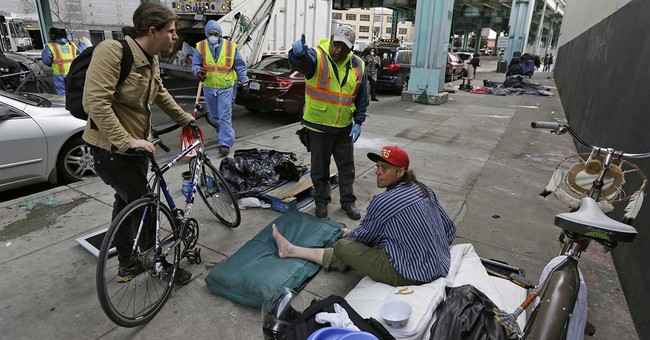 The Environmental Protection Agency is expected to hit San Francisco with a notice of environmental violations related to the homelessness problem in the city.

“There’s tremendous pollution being put into the ocean because they’re going through what’s called the storm sewer that’s for rainwater,” Trump told reporters Wednesday on Air Force One. “And we have tremendous things that we don’t have to discuss pouring into the ocean. You know there are needles, there are other things.”

Trump, who was returning from a two-day fundraising trip to California, said the city must clean up the problem.

“We can’t have our cities going to hell,” he said. “These are great cities. And we can’t lose our great cities like this.”

The announcement came the same day the administration revoked the state's waiver for auto emissions.

The Trump Administration is revoking California’s Federal Waiver on emissions in order to produce far less expensive cars for the consumer, while at the same time making the cars substantially SAFER. This will lead to more production because of this pricing and safety......

.... advantage, and also due to the fact that older, highly polluting cars, will be replaced by new, extremely environmentally friendly cars. There will be very little difference in emissions between the California Standard and the new U.S. Standard, but the cars will be....

....far safer and much less expensive. Many more cars will be produced under the new and uniform standard, meaning significantly more JOBS, JOBS, JOBS! Automakers should seize this opportunity because without this alternative to California, you will be out of business.