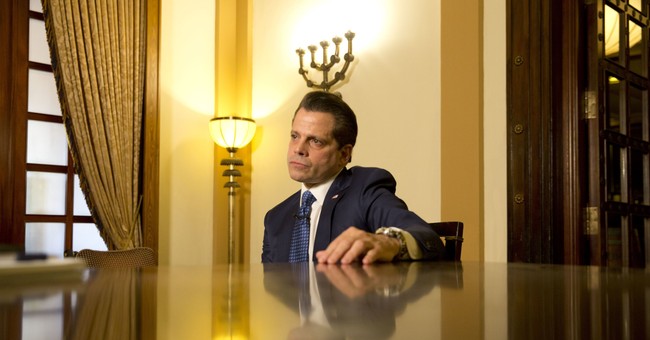 Anthony Scaramucci is continuing to speak out against President Trump, telling CNN on Monday that he’s putting together a group of former Cabinet members that he’s hoping will do the same. The end goal for the former White House Communications Director, who was on the job less than two weeks, is to find a GOP challenger to Trump in 2020.

“I'm in the process of putting together a team of people that feel the exact same way that I do. This is not a ‘Never Trump’ situation, this is not just screeching rhetoric. This is, 'OK, the guy's unstable, everyone inside knows it, everyone outside knows it, let’s see if we can find a viable alternative,'” he said on CNN’s “New Day.”

“Moreover, I’ve got to get some of these former Cabinet officials in unity to speak up about it.”

While he did not name names, he said he believes more who feel the president is unstable will speak publicly in the near future.

“I predict in middle or late fall there will be a trove of people that will come together in unity to say this is what’s going on. This is how the person’s acting. This is why there’s nobody inside the White House he’s taking any advice from,” Scaramucci said.

“Anthony Scaramucci is a highly unstable 'nut job' who was with other candidates in the primary who got shellacked, & then unfortunately wheedled his way into my campaign,” he said on Twitter. “I barely knew him until his 11 days of gross incompetence-made a fool of himself, bad on TV. Abused staff, got fired. Wrote a very nice book about me just recently. Now the book is a lie? Said his wife was driving him crazy, 'something big' was happening with her. Getting divorced. He was a mental wreck. We didn’t want him around. Now Fake News puts him on like he was my buddy!”

He later tweeted out a video compilation Scaramucci praising him.

Nobody ever heard of this dope until he met me. He only lasted 11 days! pic.twitter.com/RzX3zjXzga

Scaramucci's firing came days after a profanity-laced interview with the New Yorker's Ryan Lizza, in which he showed just how unstable he is.

Milley Details Nancy Pelosi's Attempt to Take Over the Chain-of-Command
Townhall
Not on her watch! Jennifer Rubin isn't about to just sit there and let someone accurately quote Joe Biden's apparent lie about Afghanistan withdrawal
Twitchy
The Obscene Gaslighting on Afghanistan Begins as Biden’s House of Cards Comes Tumbling Down
Redstate
Insanity Wrap: Jen Psaki Is the Stupidest Person in the World (Or Hopes You Are)
PJ Media