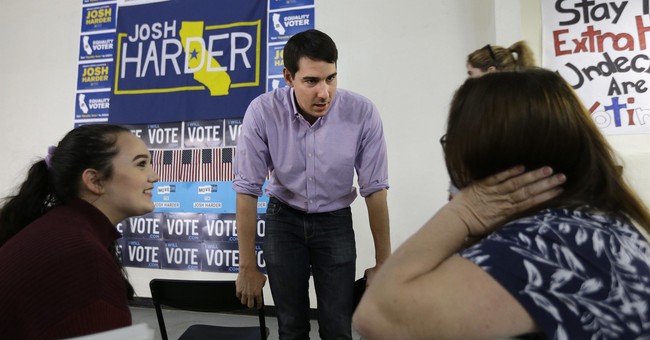 "This has been a hard fought campaign and we congratulate Congressman Denham and his family for his service to our nation in the military and to this district in Congress," Harder said in a statement.

"Now that it’s over, I pledge to be a member of Congress for this entire district regardless of political party, regardless of who you voted for," he added. "Washington is broken because our leaders have put party over country -- I pledge that I will always put this community before anything in Washington."

Harder, 32, a venture capitalist, had anchored his campaign to Denham's vote against the Affordable Care Act, while arguing that he would push for universal health care in Congress. He also argued that Denham and other Washington Republicans ignored poverty and health care in the agricultural 10th District in California's Central Valley. […]

The 51-year-old Denham had depicted Harder as a liberal, Silicon Valley insider whose values were more closely aligned with House Democratic leader Nancy Pelosi than a district known for producing cherries and almonds. An ad he posted on Twitter labeled Harder "extreme."

The contest was one of a string of showcase battles in California in Republican districts that were targeted by Democrats after Hillary Clinton carried them in the 2016 presidential election. (SF Gate)

Harder’s win is the fourth Democratic pickup of a Republican House seat in California.