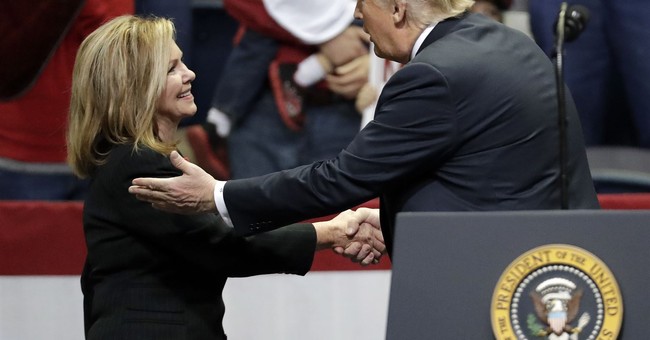 The Tennessee Senate race has just been called for Republican Rep. Marsha Blackburn. Her victory over her Democratic opponent, former Gov. Phil Bredesen, to replace Sen. Bob Corker went as many pollsters predicted in recent weeks.

Blackburn has been an outspoken supporter of President Trump and his policies, campaigning on issues such as a securing the border, safeguarding the Second Amendment, ensuring constitutionalist judges get put on the bench, cutting taxes and regulation, defending the right to life, and more.

The reasons the contest was so close was due to Bredesen’s popularity in the state.

"I think any other Democrat would be behind by 15 to 20 points," said Anthony Nownes, a professor at the University of Tennessee-Knoxville. "Few voters associate Bredesen with the national Democratic Party, and he has worked hard to present himself to voters as a competent problem-solver rather than a partisan.”

Most notably, Bredesen did support Justice Brett Kavanaugh’s nomination, even amid the allegations of sexual misconduct. He also said he would not support Sen. Chuck Schumer for majority leader if his party took back the Senate.

Those qualities weren’t enough, however, to win over a state that President Trump won in 2016 by 26 points.

That’s why President Trump, while campaigning for her in the state recently told the crowd that  “a vote for Marsha is really a vote for me and everything that we stand for.”

“Marsha Blackburn demonstrated the type of conservative leadership Tennessee voters want in Washington,” said NRSC Chairman Cory Gardner. “We want to congratulate Senator-elect Blackburn on a hard-fought victory and look forward to her working in the U.S. Senate to confirm conservative judges, push pro-growth reforms and advocate for policies that improve the lives of all Tennesseans.”