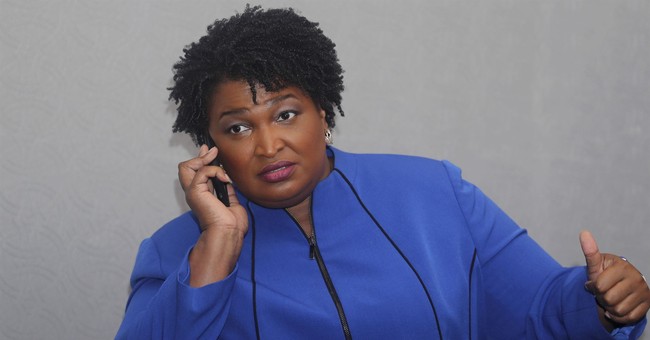 Georgia’s Democratic gubernatorial candidate Stacey Abrams admitted Monday that she once burned the state’s flag during a protest on the steps of the state’s Capitol in June 1992 while a student at Spelman College.

Abrams’s acknowledgement of the incident came after an article in the Atlanta Journal-Constitution surfaced showing Abrams helping torch the flag, which at the time pictured a “Stars and Bars” Confederate battle symbol. The state flag changed under Democratic Gov. Roy Barnes in 1993.

“During Stacey Abrams’ college years, Georgia was at a crossroads, struggling with how to overcome racially divisive issues, including symbols of the Confederacy, the sharpest of which was the inclusion of the Confederate emblem in the Georgia state flag,” read a statement from Abrams' campaign, first reported by The New York Times. “This conversation was sweeping across Georgia as numerous organizations, prominent leaders, and students engaged in the ultimately successful effort to change the flag.”

The statement continued: “Abrams’ time in public service as deputy city attorney and as a state legislative leader have all been focused on bringing people together to solve problems.”

The candidate’s defense of the flag burning came on the eve of a debate with her Republican challenger, Georgia Secretary of State Brian Kemp, who had labeled her “too extreme for Georgia" even before the incident was revealed.

According to RealClearPolitics’s average of polls, Georgia’s gubernatorial race is a toss-up, with Kemp ahead by 2 points.