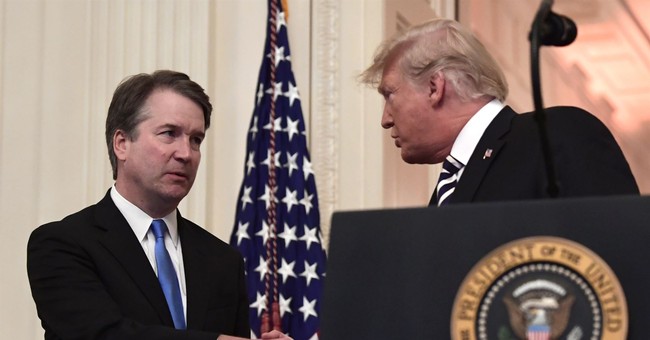 President Trump on Monday apologized to Associate Supreme Court Justice Brett Kavanaugh and his family during a swearing-in ceremony at the White House for the way he was treated by Democrats during the confirmation hearings.

"On behalf of our nation, I want to apologize to Brett and the entire Kavanaugh family for the terrible pain and suffering you have been forced to endure," Trump said. "Those who step forward to serve our country deserve a fair and dignified evaluation, not a campaign of political and personal destruction based on lies and deception. What happened to the Kavanaugh family violates every notion of fairness, decency, and due process. In our country, a man or a woman must always be presumed innocent unless and until proven guilty."

Trump then declared that "under historic scrutiny," Kavanaugh had been "proven innocent."

In front of the entire country and world, live on every major outlet, Donald Trump apologizes to Brett Kavanaugh and his family for "the terrible pain and suffering" the Left has subjected them to.

All jaws are on the floor. pic.twitter.com/m7xYZmnrKI

After Trump’s remarks, former Associate Justice Anthony Kennedy administered the oath to Kavanaugh, which as Trump noted, was the first time a justice had sworn in his former clerk to take his seat.

Despite the grueling confirmation battle, Kavanaugh opened his remarks by promising that “I take this office with gratitude and no bitterness.”

Echoing remarks he’s made before, Kavanagh said he remains an optimist.

“I live on the sunrise side of the mountain," Kavanaugh said. "I see the day that is coming, not the day that has gone."

Kavanaugh had officially been sworn in during a private ceremony at the Supreme Court on Saturday, shortly after he was confirmed. His first day on the bench is Tuesday.