Graham to Protester: 'Why Don't We Dunk Him in Water and See if He Floats' 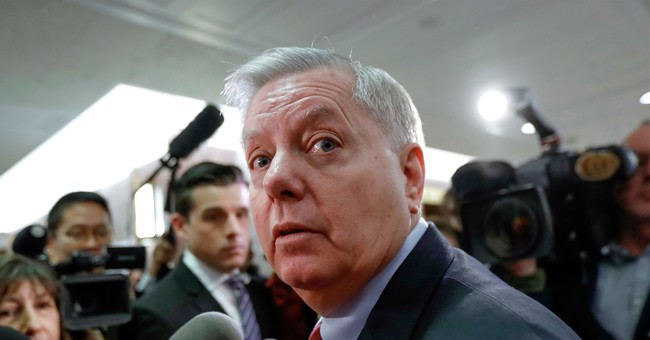 "You've humiliated this guy enough and there seems to be no bottom for some of you," Graham first told the woman.

After badgering him some more, the South Carolina Republican turned around and quipped: "Why don't we dunk him in water and see if he floats?"

He then returned to addressing reporters.

If you're a Democrat watching Lindsey Graham stop an interview cold, spin around and WREK a liberal protester into silence on national TV with a line about a WITCH -- you have to be thinking: 'What in sweet Hell have we unleashed on ourselves? pic.twitter.com/IDWE3ZrAUy

I have to say it. I love Lindsey Graham 2.0 https://t.co/VTZFWsIZ9b

Lindsey Graham 2.0 is the BEST update EVER. https://t.co/crWWsl8AgA

"The bottom line here: process," Graham said. "Most all Democrats had made up their mind [before the allegations surfaced]. Sen. [Mazie] Hirono [(D-Hawaii)] said, 'well the goal here is to delay the hearing past the midterms so we can fill the seat.' "

"Now, she was foolish enough to say that. Are we smart enough to believe her? I actually do believe her," Graham said. "That's the goal. It's not about the truth."