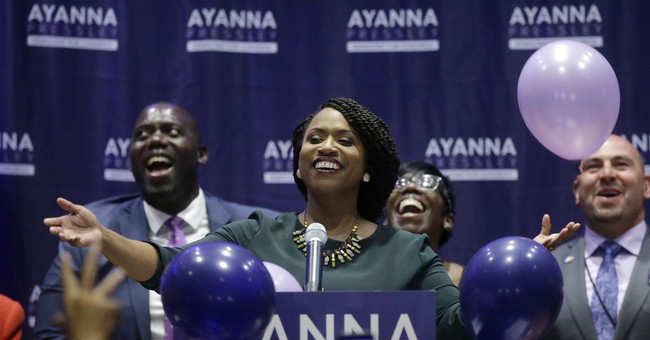 Video of the moment she found out she defeated Capuano quickly went viral.

Capuano, who is now the fourth incumbent to lose a primary this year, conceded the race shortly before it was officially called by the Associated Press.

"We did everything we could do to get this done,” Capuano said Tuesday night, WBZ NewsRadio in Boston reports. “I’m sorry it didn’t work out but this is life, and this is OK. America is going to be OK. Ayanna Pressley is going to be a good Congresswoman and Massachusetts will be well served.”

Pressley told supporters after her win that “change is on the way.”

Democratic socialist Alexandria Ocasio-Cortez has backed Pressley, who shares similar far-left views, including Medicare-for-all and defunding of Immigration and Customs Enforcement. She congratulated Pressley, whom she referred to as her "sister in service," on the historic win Tuesday night.

Congratulations to my sister in service, @AyannaPressley, on continuing her historic path into Congress tonight.

Let’s push together to make Medicare for All, tuition free college, & living wages a reality in America - all without corporate PAC money. ???? https://t.co/o2SbtUkByS

Since she is running unopposed in November, Pressley will become the Commonwealth’s first black woman elected to Congress.