US to Slap New Sanctions on Russia 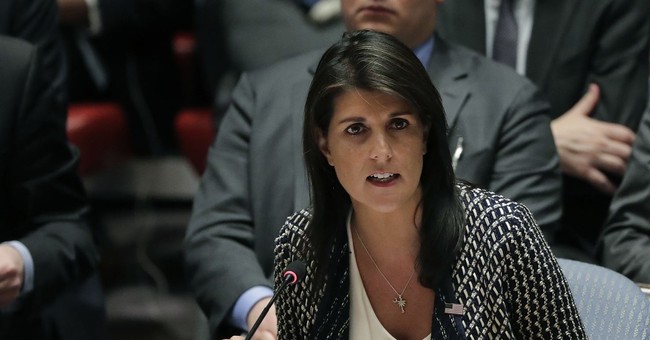 The United States will slap new sanctions on Russia over its support of Syrian dictator Bashar al-Assad, according to U.S. Ambassador to the United Nations Nikki Haley.

"We're letting Russia know this is not something that we want to be a part of," Haley said on "Fox News Sunday." "It's not something we're going to tolerate and they've got to make a decision. Right now, they don't have very good friends, and right now, the friends that they do have are causing them harm."

"The international community is telling Russia that either you make a decision on how you act and when you act, or the rest of us will make a decision in isolating you," she added.

Haley’s comments come after the U.S., France, and Britain launched a strike against Syria in retaliation for a chemical weapons attack on April 7.

The coalition hit the Barzah Research and Development Center outside Damascus with 76 missiles, destroying the facility and setting back Syrian chemical weapons capabilities “for years,” the U.S. military said in an initial assessment.

“We deployed 105 weapons against three targets that will impact the Syrian regime’s ability to develop, deploy and use chemical weapons in the future,” Marine Corps Lt. Gen. Kenneth F. McKenzie Jr., director of the Joint Staff, said during a news conference on Saturday morning. He described the facilities as “fundamental components of the regime’s chemical warfare infrastructure.” (WaPo)

Speaking on CBS’s “Face the Nation,” Haley said the sanctions would be announced Monday by Treasury Secretary Steven Mnuchin, noting that they would target “any sort of companies that were dealing with equipment related to Assad and chemical weapons use. And so, I think everyone is going to feel it at this point."

"The international community will not allow chemical weapons to come back into our everyday life," she continued. "The fact he was making this more normal and that Russia was covering this up, all that has got to stop."