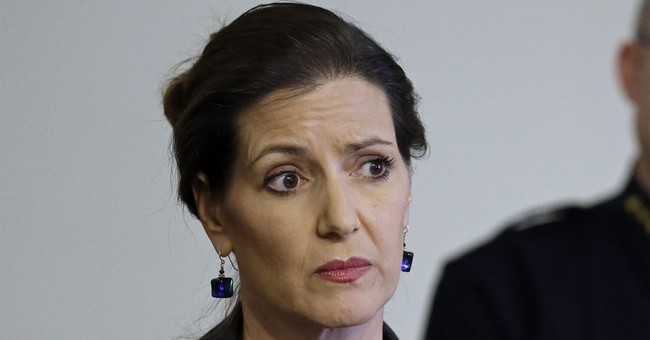 The Department of Justice is reviewing whether Oakland Mayor Libby Schaaf obstructed justice when she warned constituents about an upcoming raid by Immigration and Customs Enforcement officers.

“Earlier today, I learned from multiple credible sources that the U.S. Immigration and Customs Enforcement (ICE) is preparing to conduct an operation in the Bay Area, including Oakland, starting as soon as within the next 24 hours,” Schaaf said Saturday.

“As Mayor of Oakland, I am sharing this information publicly not to panic our residents but to protect them,” she added.

Acting ICE Director Thomas Homan slammed Schaaf for giving the warning and said Wednesday the DOJ is “reviewing” whether she broke any laws in doing so.

ICE arrested more than 150 people this week in Operation Keep Safe in the San Francisco Bay Area. Those targeted were “in violation of federal U.S. immigration laws.”

Homan suggested the number could’ve been higher if it weren’t for Schaaf’s warning, however.

He said 864 illegal immigrants and public safety threats “remain at large in the community and I have to believe that some of them were able to elude us thanks to the mayor’s irresponsible decision.”

What she did is tantamount to a gang lookout warning of a police presence in the neighborhood, “except she did it to a whole community,” he explained on “Fox & Friends.”

Schaaf is unfazed by the criticism, tweeting Tuesday that “It is Oakland’s legal right to be a sanctuary city and we have not broken any laws. We believe our community is safer when families stay together.”

And on Wednesday she doubled down, saying, “I continue to feel confident that what I did was the right thing and it was legal."

“I did not give specific information that could have endangered law enforcement,” she continued. “I encouraged people to not panic but to know their rights, to know their responsibilities and to know about the unique resources that are available in this community.”