Blackburn: My Senate Run Is Irrevocable and I'll Beat Corker If He Changes His Mind 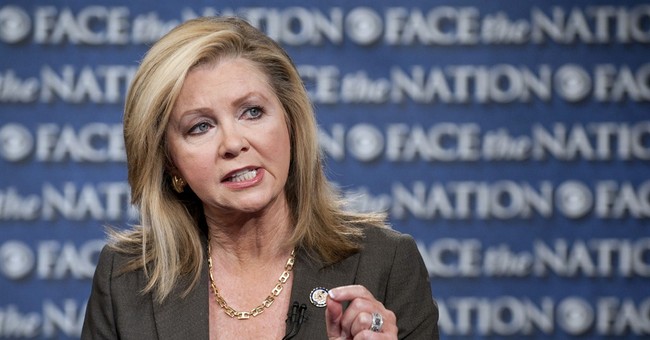 There may be rumblings that Sen. Bob Corker may not retire after all, but that doesn’t faze Rep. Marsha Blackburn, who’s staying in the race regardless of what he decides. More than that, however, she’s confident about her prospects of winning.

“I am running, and I’m going to win,” the congresswoman told conservative radio host Hugh Hewitt on Friday. “I think what Tennesseans want to see, Hugh, is a true conservative in the U.S. Senate. They want to see somebody there that is going to back Donald Trump and his agenda.”

Politico recently reported that Corker is “listening” to some of his Republican colleagues who are pressuring him to stay over concerns about losing the seat to a Democrat. He has not made any commitment’s he would stay, however.

Blackburn said she’s well aware of people who think she’s too conservative to win but that sort of talk hasn’t changed her mind.

“There are going to be individuals who think well, we need him to stay because he is a moderate, and Marsha is too conservative. And I’ve heard plenty of that,” she said. “But I have individuals who are moderates and individuals who are conservative. And I have some who are conservative Democrats who are already working in my campaign. They’re every day working, helping us raise money, helping us reach out, build out our network, make new friends, and so I just, you know, I’m kind of keeping my shoulder to the grindstone, and my focus on what we are there to do, which is to run our race and to represent the people of Tennessee.”

The congresswoman said her calling in life has been public service and when Corker announced his retirement she put a lot of thought and prayer into her decision to run.

“I am very drawn to doing what I can do to help preserve faith, family, freedom, hope and opportunity,” she explained. “And my husband and I decided that this is the race that would be the right race, the right fit. It was the right time for our family, so we’re in the race.”

Responding to whether she believes she could defeat Corker should he decide to jump back in the race, Blackburn was confident: “I certainly do.”