Trump Wants to Display Military's Might With Grand Parade 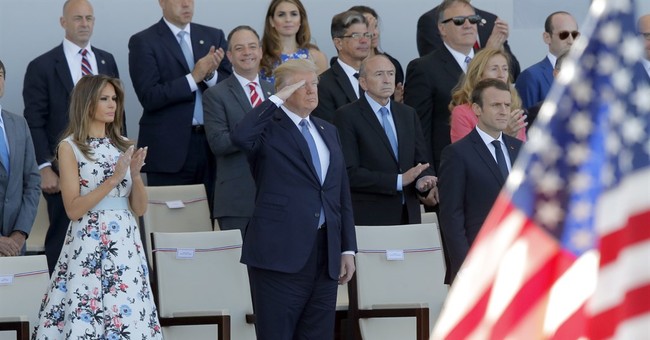 His vision “was suddenly heard as a presidential directive” during a meeting last month with high-ranking members of the military, the Washington Post reports.

“The marching orders were: I want a parade like the one in France,” said a military official who spoke on the condition of anonymity because the planning discussions are supposed to remain confidential. “This is being worked at the highest levels of the military.” [...]

A White House official familiar with the planning described the discussions as “brainstorming” and said nothing was settled. “Right now, there’s really no meat on the bones,” said the official, who spoke on the condition of anonymity to describe internal discussions. (WaPo)

The reports have been confirmed by both White House Secretary Sarah Huckabee Sanders and the Pentagon.

“President Trump is incredibly supportive of America’s great service members who risk their lives every day to keep our country safe,” Sanders said in a statement. “He has asked the Department of Defense to explore a celebration at which all Americans can show their appreciation.”

Defense Department spokesman Thomas Crosson said the Pentagon is “aware of the request and are in the process of determining specific details. We will share more information throughout the planning process.”

Trump’s vision for a grand parade was inspired by his attendance of France’s Bastille Day celebration last year in Paris with French President Emmanuel Macron.

He brought up the parade again when he saw Macron a couple months later at the United Nations General Assembly in New York and told reporters “It was one of the greatest parades I’ve ever seen. It was two hours on the button, and it was military might, and I think a tremendous thing for France and for the spirit of France.”

In typical Trump fashion, he also joked with Macron that “We’re going to have to try to top it.”

Military officials have expressed a preference for November 11, which is Veterans Day and also would be the 100th anniversary of the end of World War I, the Post reports.

Share this on Facebook
Tweet
Here's a Three-Word Policy That's Been Effective in Stopping School Shootings
Matt Vespa
'Sick Son of a Bitch' Beto O'Rourke Crashes Uvalde Press Conference
Spencer Brown
Here's the Only Red Flag We Knew About the Texas Shooter...But It Wouldn't Have Made a Difference
Matt Vespa
The National Rifle Association Responds to Uvalde
Katie Pavlich
And This Is Why NBA Coaches Should Zip It When It Comes to Politics
Matt Vespa
Biden Makes New Push For Gun Control
Katie Pavlich
CARTOONS | AF Branco
View Cartoon
Most Popular