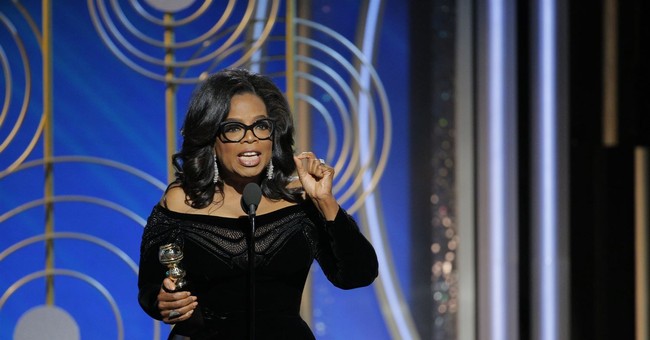 In case you missed the Golden Globes, talk from the night is whether Oprah Winfrey will run for president in 2020.

It started off with host Seth Meyers’s joke about the White House Correspondents’ Dinner when he said Donald Trump wasn’t qualified to be president.

“Some have said that night convinced him to run. So, if that’s true, I just want to say: Oprah, you will never be president! You do not have what it takes. And Hanks! Where’s Hanks? You will never be vice president. You are too mean and unrelatable. Now we just wait and see.”

Oprah, who would receive the Cecil B. DeMille award later that night, delivered a rousing speech that led many to wonder if she really is thinking about it.

"In my career, what I've always tried my best to do, whether on television or through film, is to say something about how men and women really behave. To say how we experience shame, how we love and how we rage, how we fail, how we retreat, persevere and how we overcome. I've interviewed and portrayed people who've withstood some of the ugliest things life can throw at you, but the one quality all of them seem to share is an ability to maintain hope for a brighter morning, even during our darkest nights.

"So I want all the girls watching here, now, to know that a new day is on the horizon! And when that new day finally dawns, it will be because of a lot of magnificent women, many of whom are right here in this room tonight, and some pretty phenomenal men, fighting hard to make sure that they become the leaders who take us to the time when nobody ever has to say 'Me too' again," she said.

Oprah has given mixed signals in the past about whether she'd be open to a future in politics.

In June she told The Hollywood Reporter, “I will never run for public office. That’s a pretty definitive thing.”

But, she’s also toyed with the idea, tweeting out a New York Post column in September titled “Democrats’ best hope for 2020: Oprah,” thanking the author for the “VOTE of confidence!”

Then there was her March interview with Bloomberg TV’s David Rubenstein, in which she suggested she was more open to the idea of running since Trump’s election, although she never named him.

Her best friend quickly shut down talk of her running after that interview, however.

Either way, it may not be an idea people give up on too soon. After all, even major media outlets aren't hiding their bias about it.

Nothing but respect for OUR future president. #GoldenGlobes pic.twitter.com/h4hkjewu0K

Update: NBC deleted their tweet, attributing it to a third party agency the network used during Golden Globe coverage. They stated that it was not meant to be an endorsement of any kind.

"Yesterday a tweet about the Golden Globes and Oprah Winfrey was sent by a third party agency for NBC Entertainment in real time during the broadcast," NBC's Twitter account wrote. "It is in reference to a joke made during the monologue and not meant to be a political statement. We have since removed the tweet."

Yesterday a tweet about the Golden Globes and Oprah Winfrey was sent by a third party agency for NBC Entertainment in real time during the broadcast. It is in reference to a joke made during the monologue and not meant to be a political statement. We have since removed the tweet.