And GQ's Citizen of the Year Goes to... 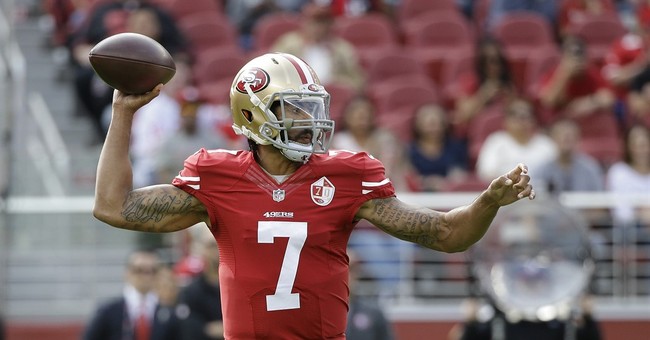 Colin Kaepernick, the former San Francisco 49ers quarterback who started the movement across the league to take a knee during the national anthem in protest of police brutality, has been named GQ’s Citizen of the Year.

Here’s what the editors had to say about why they chose the NFL-player-turned-unemployed-activist:

In 2013, Colin Kaepernick was on the cover of this magazine because he was one of the best football players in the world. In 2017, Colin Kaepernick is on GQ's cover once again—but this time it is because he isn't playing football. And it's not because he's hurt, or because he's broken any rules, or because he's not good enough. Approximately 90 men are currently employed as quarterbacks in the NFL, as either starters or reserves, and Colin Kaepernick is better—indisputably, undeniably, flat-out better—than at least 70 of them. He is still, to this day, one of the most gifted quarterbacks on earth. And yet he has been locked out of the game he loves—blackballed—because of one simple gesture: He knelt during the playing of our national anthem. And he did it for a clear reason, one that has been lost in the yearlong storm that followed. He did it to protest systemic oppression and, more specifically, as he said repeatedly at the time, police brutality toward black people. (GQ)

Tom Brady acknowledged Monday Kaepernick is a “damn good quarterback” but said he was unsure of whether there’s any truth to the claim he’s being “blackballed.”

"I have no idea if he's being blackballed,” Brady said on WEEI's "Kirk and Callahan" Monday morning. "I think he was a ... I competed against him. I thought he was a damn good quarterback. And he's played at a high level, brought his team to Super Bowls."

Last month, Kaepernick filed a grievance against the NFL accusing owners of collusion. He argued they are punishing him for starting the wave of protests and are conspiring to keep him out of the league.

“If the NFL (as well as all professional sports leagues) is to remain a meritocracy, then principled and peaceful political protest — which the owners themselves made great theater imitating weeks ago — should not be punished,” his attorney Mark Geragos said in a statement at the time. “Ahletes should not be denied employment based on partisan political provocation by the executive branch of our government. Such a precedent threatens all patriotic Americans and harkens back to our darkest days as a nation.”