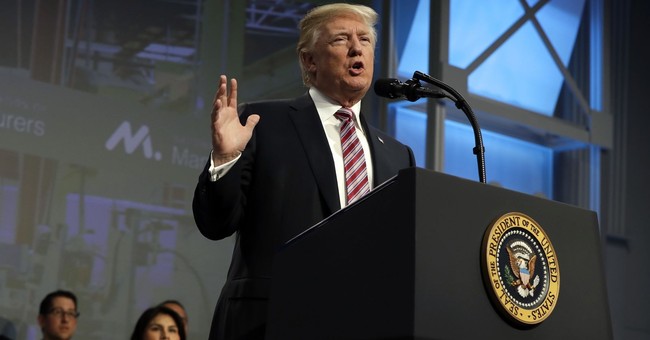 President Trump called for a “giant, beautiful, massive” tax cut that he said would be “the biggest ever in our country” during a National Association of Manufacturers’ board meeting in Washington on Friday.

Trump’s speech comes after the Republican tax framework was released Wednesday, which was put together by administration officials and key congressional Republicans.

Trump spoke about several aspects of the plan that are of particular importance to manufacturers.

The plan would lower the corporate tax rate from 35 percent to 20 percent, and would lower the rate for so-called pass-through businesses to 25 percent. Pass-throughs, which include everything from small businesses to hedge funds, currently have their income taxed through the individual code, which has a top rate now of 39.6 percent.

Trump said that the rate cut for pass-throughs will result in the lowest top marginal rate for small- and medium-sized businesses in more than 80 years. (The Hill)

“It will be rocket fuel for our economy,” he said.

The National Association of Manufacturers is supporting the president’s tax plan.

"Manufacturers in America have never been as enthusiastic or as optimistic about their future as they are this year, and that is because of the huge opportunity we have to get tax reform done," said Jay Timmons, NAM's president and CEO.