Bannon to GOP Establishment: 'Your Day of Reckoning Is Coming’ 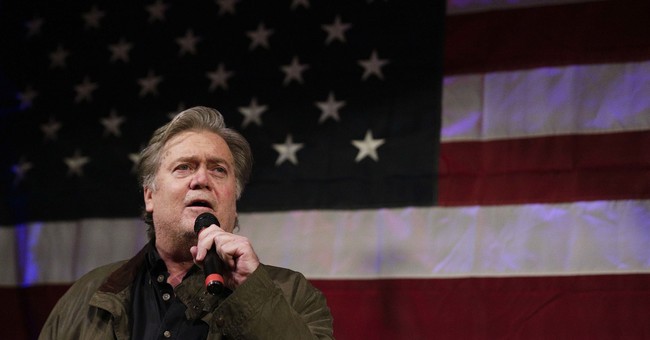 Former White House chief strategist Steve Bannon warned the GOP establishment Monday night during a rally in Alabama that their “day of reckoning” is coming.

Bannon, who was there to lend his support to former Alabama Supreme Court Chief Justice Roy Moore in his race Tuesday against Sen. Luther Strange in the Republican Senate primary runoff, repeatedly took shots at Senate Majority Leader Mitch McConnell and other prominent Republicans.

“But more important, for the donors who put up the [campaign] money and the corporatists that put up the money, your day of reckoning is coming, too.”

He also called McConnell and his political circle “the most corrupt, incompetent group of individuals” in America.

With polls showing Moore leading comfortably, the event was an early victory lap of sorts for the nationalist ex-Trump adviser. Since departing the White House last month, he’s made electing Moore — a like-minded, pugilistic outsider — the first of what he hopes will be many pet projects to oust “globalist” Republican incumbents. Bannon broke with his ex-boss, President Donald Trump — who traveled to the state last week to campaign for Strange — and suggested Monday that the president was duped into supporting the incumbent. (Politico)

Bannon also fired up the crowd when he said the GOP establishment, which is backing Strange, thinks Alabama voters are a “pack of morons.”

“They think you’re nothing but rubes,” he added. “They have no interest at all in what you have to say, what you have to think or what you want to do. And tomorrow, you’re gonna get an opportunity to tell them what you think of the elites who run this country!”

Whoever wins Tuesday's primary will head to the general election in December for the seat vacated by Attorney General Jeff Sessions.