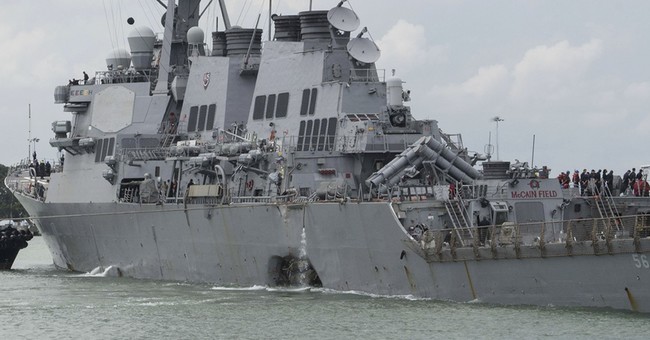 The remains of some of the 10 sailors who were missing after the USS John S. McCain crashed into an oil tanker have been found.

According to a Washington Post report, some of the bodies were found inside the damaged compartment of the ship. The search for the others continues.

Singaporean and Malaysian navy ships and helicopters had joined American aircraft searching for the sailors at sea. But earlier Tuesday, Navy and Marine Corps divers were sent into the compartments in the damaged part of the destroyer that had been sealed to stop the ship from being flooded. The ship is now moored at Changi naval base in Singapore.

The divers had found the remains of some of the sailors inside the compartments, Adm. Scott Swift, the commander of the Navy’s Pacific Fleet, said at a news conference in Singapore.

The Malaysian Navy also reported it had found a body, but it was not yet clear if it was one of the missing sailors. The body is in the process of being transferred to the U.S. Navy for identification, Swift said. (Washington Post)

No further details were released and Swift told the Post it was “premature” to discuss how many bodies were found.

The McCain collision is particularly troubling given it is the fourth such accident at sea in Asia this year, WaPo reports.

Tuesday’s statement will come as a heavy blow to the Navy but particularly to the 7th Fleet based in Yokosuka, Japan.

Yokosuka is the home port for both the McCain and for the USS Fitzgerald, which was involved in a surprisingly similar collision just over two months ago, leading to seven sailors being killed.

The Fitzgerald collided with a container ship south of Japan, leading to significant damage to its hull and a frantic effort to seal off the damage and stop the rest of the ship from flooding. Seven sailors were trapped in their berthing compartment in the process, and all drowned.

A fleetwide review of seamanship and training was ordered by the chief of naval operations, Navy Adm. John Richardson.

“This will include, but not be limited to, looking at operational tempo, trends in personnel, materiel, maintenance and equipment,” Richardson said. “It also will include a review of how we train and certify our surface warfare community, including tactical and navigational proficiency.”