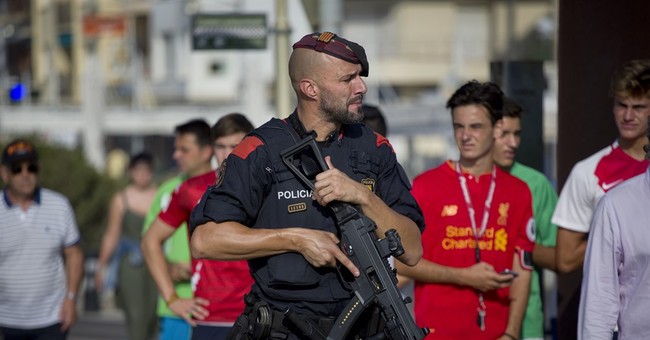 Spanish police shot five terrorists early Friday morning after they attempted to plow a vehicle into tourists on the Cambrils seafront, 75 miles south of Barcelona. After the attackers’ car overturned, some began stabbing people.

One woman died in the attack, while six others were injured, including a police officer.

Police were able to kill four at the scene and one other nearby. The attackers were wearing fake suicide belts.

The incident comes one day after a terrorist drove a van into a crowd of people in Barcelona, killing 14 people and injuring more than 100. That driver is still at large.

Investigators revealed that a 12-strong terror cell thought to have been behind the two Spanish attacks is believed to have been planning an atrocity with gas canisters.

In Cambrils, holidaymakers ran for their lives as gunfire broke out close to the coastal town's beachfront promenade early on Friday. A British tourist told how families and residents were ordered to take cover as bullets tore through the air in a scene he described as being like "watching a horror film".

The attackers' Audi A3 overturned and the men were fired upon by police when they got out. One was reportedly brandishing a knife. Police said the attackers had been wearing explosive belts, which experts later concluded were fake.

Investigators are working on the theory that the attacks in Cambrils and Barcelona are linked to a gas explosion at a house in the town of Alcanar on Wednesday that killed one person. (The Telegraph)

ISIS claimed responsibility for the Barcelona attack "in response to calls for targeting coalition states."