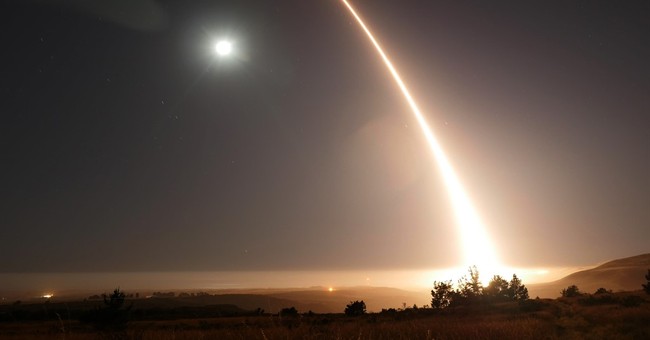 Just days after North Korea tested yet another intercontinental ballistic missile that had the potential to reach the U.S. mainland, the U.S. in a show of readiness and capability test fired an unarmed ICBM from California.

Wednesday’s test was not a direct response to Pyongyang’s actions, the Air Force said in a statement, but was meant to show that the US “is safe, secure, effective and ready to be able to deter, detect and defend against attacks on the United States and its allies.”

"These test launches require the highest-degree of technical competence and commitment at every level," Col. Michael Hough, the 30th Space Wing commander and launch decision authority, said in a statement.

The unarmed Minuteman III missile was launched at 2:10 a.m. PT from Vandenberg Air Force Base, about 130 miles northwest of Los Angeles. […]

The ICBM was equipped with a test reentry vehicle, which officials said showed it traveled about 4,200 miles to the Kwajalein Atoll in the Marshall Islands.

The operation was conducted by a team of Air Force Global Strike Command Airmen from the 90th Missile Wing, along with the 576th Flight Test Squadron and the 30th Space Wing stationed at Vandenberg. […]

Air Force Global Strike Command has tested 299 Minuteman III ICBMs over the program's history. The Minuteman IIIs are the U.S. military's only land-based ICBMs. Another one was tested earlier this year in February from Vandenberg.

The U.S. military schedules four test-launches each fiscal year, with the actual schedule plotted out several years in advance — so it's unrelated to recent events, Air Force Capt. Michele Rollins, a spokesperson for the strike command, told CNBC. (NBC)

North Korea launched its second ICBM Friday, which traveled 45 minutes and over a distance of more than 1,000 kilometers laterally. Analysts believes the U.S. mainland from Los Angeles to Chicago are now in Pyongyang's reach.

The White House maintains that “all options are on the table” with regard to dealing with North Korea. However White House Press Secretary Sarah Huckabee Sanders said the administration will not “broadcast what we’re going to do.”