ISIS Is Killing Children to Force Families to Stay in Mosul 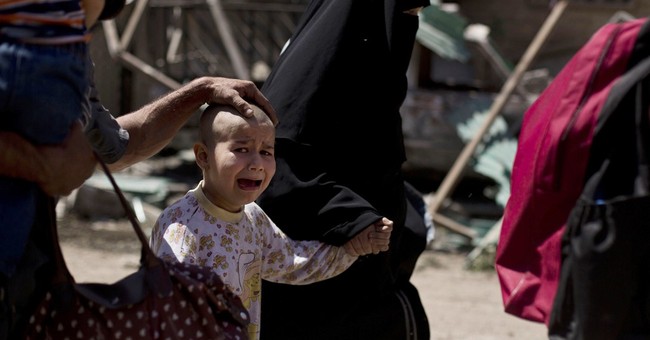 The Islamic State has resorted to killing children in Mosul in an effort to keep families from leaving the city, which is held by the militants as they try to fend off Iraqi forces.

"They are using children as a weapon of war to prevent people from fleeing," said UNICEF's Iraq representative, Peter Hawkins, AP reports. "This just highlights how indiscriminate and catastrophic this war is."

The U.N. children's agency said it has documented a number of cases in which IS fighters killed the children of families trying to escape from neighborhoods controlled by the militants. […]

Iraqi troops are slowly clearing the last pockets of IS fighters from Mosul's old city in an operation launched earlier this week. But an estimated 100,000 civilians packed into the dense terrain have slowed progress.

UNICEF said 1,075 Iraqi children have been killed and 1,130 wounded since IS militants overran nearly a third of Iraq in 2014. In the past six months alone, violence in Iraq has killed 152 children and injured 255, it said. In addition, the agency said, more than 1 million children have had their educations put on hold by either militant rule or displacement.

Many children have also been forced to join the fight. According to UNICEF, at least 231 children were recruited by the terror group and other militants.

Thousands of civilians have been killed and injured in the fight to retake Mosul, while hundreds of thousands of fled their homes.