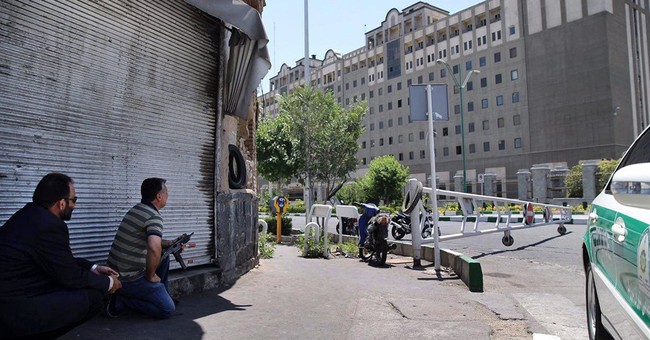 The Islamic State claimed responsibility for two attacks in Iran Wednesday that killed at least 12 people and injured dozens of others.

In the first ISIS attack in the Islamic Republic, suicide bombers and teams of gunmen stormed the parliament building in Tehran as well as the shrine of Ayatollah Khomeini.

In a rare and stunning move, ISIS released video from inside the parliament building while the attack was under way.  The video, circulated online, shows a gunman and a bloody, lifeless body of a man lying on the ground next to a desk. A voice on the video praises God and says in Arabic: "Do you think we will leave? We will remain, God willing." Another voice repeats the same words. The two appeared to be parroting a slogan used by IS spokesman Abu Mohammad al-Adnani, who was killed in Syria last year.

The four terrorists who perpetrated the attack were all killed.

Witnesses said the jihadists were on the fourth floor of the parliament building shooting down at pedestrians on the street.

"I was passing by one of the streets. I thought that children were playing with fireworks, but I realized people are hiding and lying down on the streets," Ebrahim Ghanimi told The Associated Press. "With the help of a taxi driver, I reached a nearby alley."

Rita Katz, the director of SITE Intelligence Group, said ISIS’s leader has been warning about an attack on Iran for a long time.

1) #ISIS has been threatening to attack #Iran, a formidable enemy to jihadis, since its inception by Zarqawi. https://t.co/WdjBB1j34W
— Rita Katz (@Rita_Katz) June 7, 2017