Report: Deputy AG Threatened to Quit Over Comey Firing; UPDATE: No, He Didn't 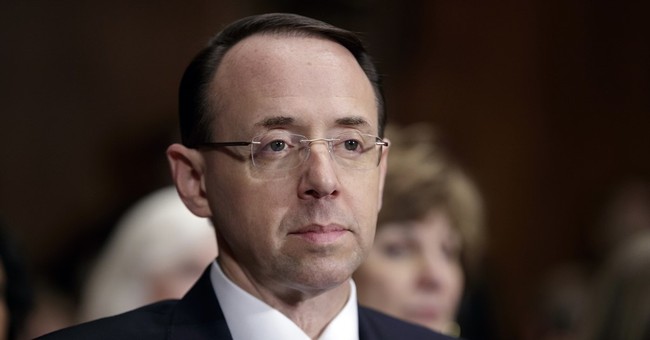 Update: Rosenstein denied that he threatened to quit over Comey's firing.

Original Post: In a three-page letter sent to Attorney General Jeff Sessions Tuesday, Deputy Attorney General Rod Rosenstein recommended the firing of James Comey, noting that the “FBI’s reputation and credibility have suffered substantial damage” under the director. He outlined the “Director’s handling of the conclusion of the investigation of Secretary Clinton’s emails” as the reason why he should be let go.

This letter was widely touted by White House officials as reason for President Trump’s decision, but according to a new report in the Washington Post, the president had already made up his mind about Comey. Moreover, Rosenstein threatened to quit for being cast as the one responsible for Comey’s firing.

The president already had decided to fire Comey, according to this person. But in the meeting, several White House officials said Trump gave Sessions and Rosenstein a directive: to explain in writing the case against Comey.

The pair quickly fulfilled the boss’s orders, and the next day Trump fired Comey — a breathtaking move that thrust a White House already accustomed to chaos into a new level of tumult, one that has legal as well as political consequences.

Rosenstein threatened to resign after the narrative emerging from the White House on Tuesday evening cast him as a prime mover of the decision to fire Comey and that the president acted only on his recommendation, said the person close to the White House, who spoke on the condition of anonymity because of the sensitivity of the matter.

Trump later told reporters that the decision to fire him was really quite simple: “He wasn’t doing a good job.”

But the Post, which says it spoke to 30 individuals in the White House, DOJ, FBI, and on Capitol Hill about the matter, said those accounts “paint a conflicting narrative centered on the president’s brewing personal animus toward Comey.”

As reasons, the paper pointed to the fact that Comey wouldn’t support Trump’s wiretapping claims, the focus on the counterintelligence investigation into Russia’s efforts to influence the 2016 election, and that the FBI wasn’t giving enough attention to leaks to journalists.

Since the firing, Comey has kept a low profile, but wrote a letter to FBI staff Wednesday saying he has “long believed that a President can fire an FBI Director for any reason, or for no reason at all. I’m not going to spend time on the decision or the way it was executed. I hope you won’t either. It is done, and I will be fine, although I will miss you and the mission deeply.”