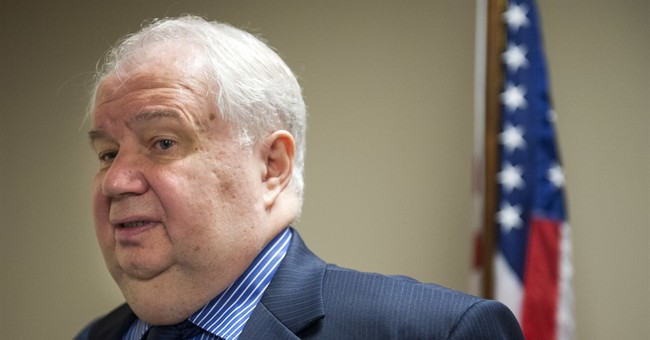 The Russian ambassador who met with then-Sen. Jeff Sessions also happened to be a recurring guest at the Obama White House.

In fact, Ambassador Sergey Kislyak, whose interactions with Sessions have led Democrats to call for the attorney general’s resignation, visited the White House 22 times, and even as recently as September 2016.

Kislyak is listed an additional 12 times among other visitors for events like "holiday open houses" or "diplomatic corps reception."

The logs were released by the Obama White House as a push for transparency in his administration.

Sessions, who has recused himself from any investigations into Russia’s interference in the 2016 presidential election, came under fire this week for meeting with Kislyak twice in the past year (in his capacity as a senior member of the Armed Services Committee).

Democrats have accused Sessions of making “misleading” statements during his confirmation hearing when asked what he would do if he learned that anyone in the Trump campaign communicated with Russia during the 2016 campaign.

“I’m not aware of any of those activities,” he said responding to Sen. Al Franken’s question, adding, “I have been called a surrogate at a time or two in that campaign and I did not have communications with the Russians.”

Sessions had met with more than two dozen ambassadors in 2016—there wasn’t anything out of the ordinary about his conversation with Kislyak, which was about relations between the two countries, not the election, his spokeswoman confirmed.

So where’s the Democrats’ outrage over Kislyak going to the White House so frequently?

There won’t be any. Just like there was silence from left when then-Attorney General Loretta Lynch privately met with Bill Clinton while his wife was under investigation by the FBI, or when former President Obama was caught on a hot mic promising Russia he’d have more “flexibility” on missile defense after the 2012 election.

As Bill O’Reilly noted, their “hypocrisy is on full display” in the Sessions case.