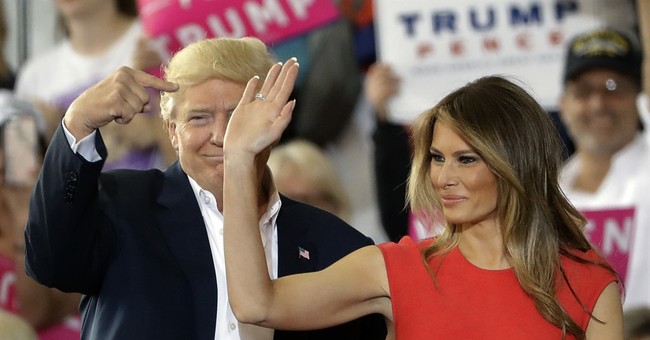 Introducing her husband at Saturday’s rally in Melbourne, Florida, Melania Trump began by reading the Lord’s Prayer, but while the crowd loved it, leftists on social media were not so kind.

Liberals attacked the first lady for everything from her accent and faith to the fact that she read the prayer instead of having it memorized.

“With an hour’s practice I could probably say the Lord’s Prayer better in Slovene than Melania Trump does it in English,” @adrianshort wrote.

@NicoleAngeleen tweeted: “I could recite the Our Father backwards, drugged with a gun to my head. If you need to read this prayer, you’re not Christian (re: Melania).”

“God Bless her, but listening to Melania do 'The Lord’s Prayer' sounds like someone getting cursed to become a 'Dracula,'@carnojoe wrote.

“Melania starts the dictatorship rally with the Lord’s Prayer? NOT EVERY AMERICAN IS CHRISTIAN!!!! Country over party,” tweeted @JaimePrimak.

Some even took personal shots at the first lady, calling her a “whore.”

“…plus melania read the 'our father' like a whore in confession after a night of escorting,” @TrumpUriNation wrote in a tweet that has since been deleted.