McConnell Admits He Never Thought Trump Had a Chance 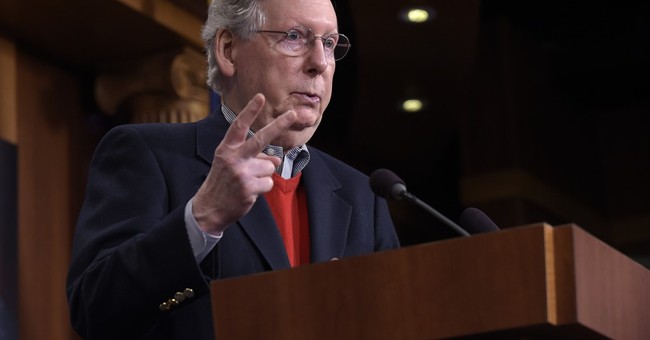 Donald Trump’s victory on Election Day came as a surprise to politicians and pundits alike, including Sen. Mitch McConnell, who recently told Kentucky Education Television’s “One to One” that he never thought the president-elect would win.

“I didn’t think President Trump had a chance at winning,” he said on the show late Monday. “It never occurred to me that he might be able to win.”

Ultimately it was the way Trump connected with voters that gave him the edge over Hillary Clinton, he explained.

“I think that there was a lot of feeling among just ordinary people all across the country that the current administration didn’t care about them,” he said. “Trump was able to convey—oddly enough, a message from a billionaire who lives in Manhattan—a genuine concern for people who feel kind of left out, are sort of offended by all the political correctness they see around them and didn’t feel like this is the American that they’re accustomed to.”

What surprised McConnell most was Trump’s ability to turn blue states red.

“What was amazing about Trump’s victory is that he pierced the ‘blue wall’ that I haven’t seen a Republican carry in a long time. He was able to break through and that’s why he won a comfortable Electoral College victory. Hillary Clinton won the popular vote.”

He also said he thought Republicans “would come up short” in their effort to maintain control of the Senate.

But being wrong on both accounts made the election all the more exciting, he explained.

"It was really exciting because you get more excited about things you don’t expect to occur.”