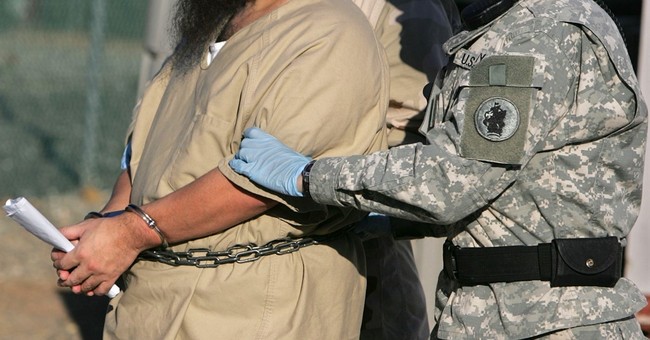 Back in March, Defense Department official Paul Lewis told lawmakers that freed Guantanamo Bay prisoners had returned to the fight and killed Americans, but he declined to give further detail.

Now, however, The Washington Post has learned more information.

The Obama administration believes that at least 12 detainees released from the prison at Guantanamo Bay, Cuba, have launched attacks against U.S. or allied forces in Afghanistan, killing about a half-dozen Americans, according to current and former U.S. officials. [...]

But The Washington Post has learned additional details about the suspected attacks, including the approximate number of detainees and victims involved and the fact that, while most of the incidents were directed at military personnel, the dead also included one American civilian: a female aid worker who died in Afghanistan in 2008. The officials, who spoke on the condition of anonymity to discuss a sensitive matter, declined to give an exact number for Americans killed or wounded in the attacks, saying the figure is classified.

While it’s true that those prisoners were all released under the Bush administration, it further supports the argument that President Obama’s plan to completely shut down Guantanamo Bay is a dangerous one that should be avoided.

Some lawmakers, like Sen. Kelly Ayotte, argue that the administration’s high classification level regarding the suspected attacks is their way of avoiding discussion about a politically sensitive topic.

“There appears to be a consistent and concerted effort by the Administration to prevent Americans from knowing the truth regarding the terrorist activities and affiliations of past and present Guantanamo detainees,” Ayotte wrote in a letter this week urging President Obama to declassify information about how many U.S. and NATO personnel have been killed by freed detainees.

In the most recent U.S. report of the 676 detainees who have been released from Guantanamo Bay as of January, 118 have returned to the battlefield, while another 86 are suspected of doing so, CNN reports. That amounts to roughly one out of every three released.

The Obama administration insists that keeping Guantanamo Bay open undermines our national security rather than advances it.