EgyptAir Flight Crashes With 66 On Board 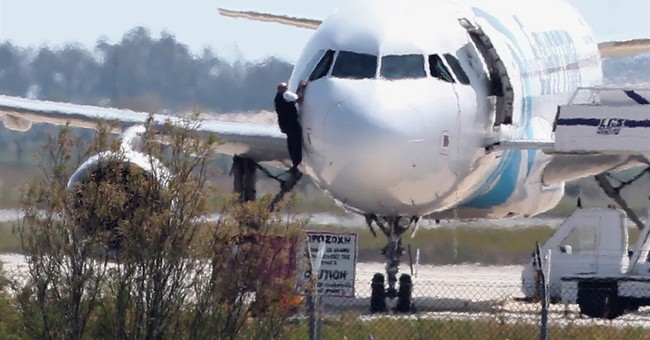 Update: According to Egyptian officials, the crash was more likely to be a result of terrorism than a technical failure.

On whether the crashed was caused by a terror attack or technical problem, Prime Minister Sherif Ismail told reporters, “We cannot rule anything out.”

Officials from Egypt's Civil Aviation ministry said the "possibility that the plane crashed has been confirmed," as the plane failed to land in any nearby airports.

Konstantinos Lintzerakos, director of Greece Civil Aviation Authority, gave a roughly similar account to that given by EgyptAir. In comments to the private Antenna television, he said Greek air traffic controllers were in contact with the pilot who reported no problems as the aircraft cruised at 37,000 feet, traveling at 519 mph.

The controllers tried to make contact with the pilot 10 miles before the plane exited the Greek Flight Information Region, or FIR. The pilot did not respond, he said, and they continued to try to speak to him until 2:29 a.m. Cairo time (8:29 EDT) when the plane disappeared from the radar inside Egypt's FIR, 7 miles southeast of the island of Crete.

The plane made “sudden swerves” before it disappeared, Greek defense minister Panos Kammenos said, veering “90 degrees left and then a 360- degree turn toward the right, dropping from 38,000 to 15,000 feet and then it was lost at about 10,000 feet."

Egypt, France, and Greece have sent military aircraft and ships to search for wreckage in the Mediterranean Sea, as its believed to have crashed near the southern Greek island of Karpathos.

Updates will be added to this post as they are made available.