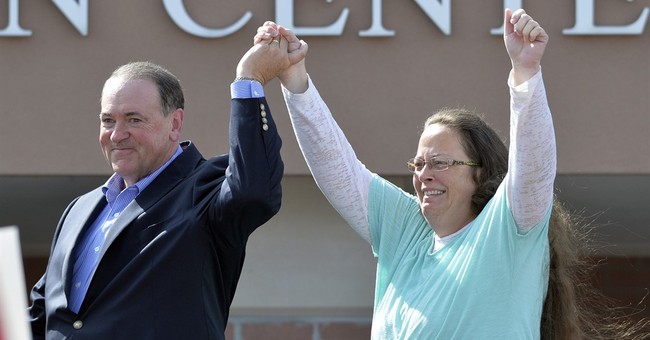 It’s been more than six months since Rowan County clerk Kim Davis was jailed for refusing to issue marriage licenses to both gay and straight couples, but she scored a major victory in the fight this week.

Kentucky Gov. Matt Bevin on Wednesday signed a bill that removes the names of county clerks from the state marriage license forms. Thus, for Christians like Davis, issuing a license to a gay couple will no longer carry the same sort of approbation it once did.

At the time, Davis said “to issue a marriage license which conflicts with God's definition of marriage, with my name affixed to the certificate, would violate my conscience.”

Senate Bill 216, signed by Republican Governor Matt Bevin, also creates a single form that either heterosexual or same-sex couples can use. Applicants can choose between being called bride, groom or spouse.

"We now have a single form that accommodates all concerns. Everyone benefits from this common sense legislation," Bevin told Reuters in an emailed statement. "There is no additional cost or work required by our county clerks. They are now able to fully follow the law without being forced to compromise their religious liberty."