Tim Tebow 'Intrigued' By Idea of Running For Office One Day 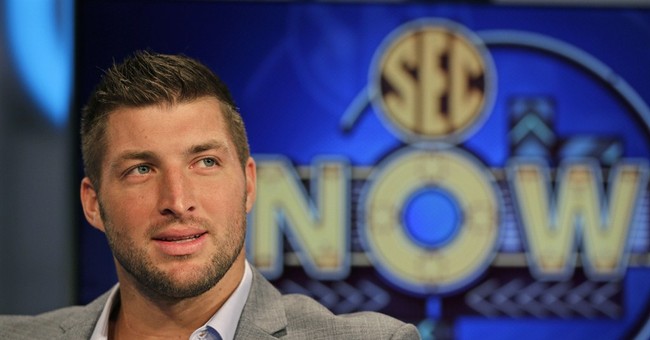 Don’t bank on seeing Tim Tebow on the ballot just yet, but the NFL retiree seemed open to the idea of running for office one day.

When asked by Fox & Friends’ Ainsley Earhardt whether he’d ever consider a future in politics, Tebow said now probably wasn’t the time for it in his life, but that ‘if there’s a chance you could make a difference someday with something, then that would be intriguing.”

Tebow, known as much for his unique playing style as his openness about his Christian faith both on and off the field, was promoting his sixth annual golf fundraiser for various children's charities.

The quarterback remains a fan favorite in the NFL, and his signature celebration, "Tebowing," was accepted as a word in the English language by the Global Language Monitor in 2011.

After winning the Heisman Trophy in 2007 as a sophomore, Tebow was drafted in 2010 by the Denver Broncos and had two seasons of wild ups and downs before being traded to the New York Jets. Despite his popularity, Tebow was released after one season, landing short stints with the New England Patriots and Philadelphia Eagles before being released during the 2015 preseason.

Who knows, maybe one day he would enter the political fray and become the role model Earhardt was talking about, but I wouldn’t count on it.