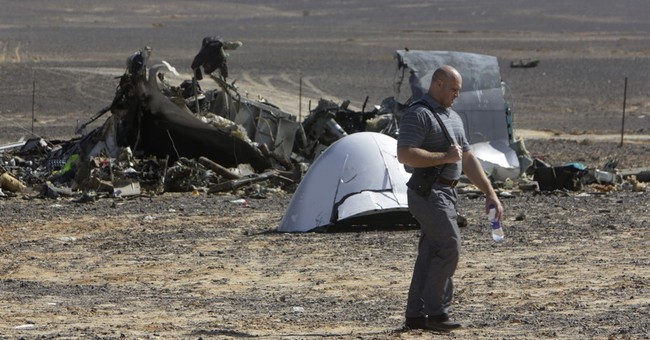 While acknowledging that the investigation into the Russian plane that crashed into the Sinai Peninsula is still ongoing, the British government said on Wednesday that it may have been bombed.

“While the investigation is still ongoing we cannot say categorically why the Russian jet crashed,” said a spokesperson for No. 10 Downing Street. “But as more information has come to light we have become concerned that the plane may well have been brought down by an explosive device.”

No further information was given as to why this conclusion has been reached, however.

As a result, the government announced that departing flights from Sharm el-Sheikh to the U.K. tonight will be delayed so that aviation experts can have adequate time to make a security assessment of the airport.

“In terms of flights from the UK to Sharm, there are no more departures today,” the statement continued, adding that it is only a precautionary measure and it is not changing the level of its travel guidance.

The Islamic State took credit for downing the aircraft, which killed all 224 people on board, but Russian and Egyptian officials have largely denied the claims.

While analysts initially said the likelihood that the Islamic State has the technical advancement to shoot down a plane traveling at 31,000 feet is slim, that said nothing of the possibility that it was an on-board explosive that took the plane down. The Russian airline company nearly admitted as much when it said the plane likely came apart due to an “external influence," after having ruled out “technical problems” and “human error” as possible causes for the crash.

"The only [explanation] for the plane to have been destroyed in mid-air can be specific impact, purely mechanical, physical influence on the aircraft," said Alexander Smirnov, deputy director of the airline.

"There is no such combination of failures of systems which could have led to the plane disintegrating in the air," he added.

Indeed, on Wednesday afternoon, an unnamed U.S. official told CNN that "there is a definite feeling it was an explosive device planted in luggage or somewhere on the plane," but acknowledged the intelligence community at large had not reached a formal conclusion.

Another U.S. official said the intelligence regarding ISIS is in part based on monitoring of internal messages of the terrorist group. Those messages are separate from public ISIS claims of responsibility, that official said.

ISIS or an ISIS affiliate is believed to have planted the bomb, according to the official.

Updates will be added as they come in.