State Dept Offering Millions to Get Terrorist Freed From Gitmo Back 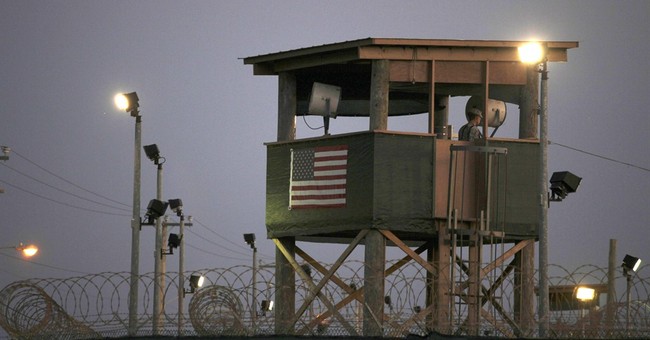 On December 18, 2014, the State Department put Ibrahim al-Rubaysh, a senior leader of al Qaeda in the Arabian Peninsula, on a Specially Designated Global Terrorist watch list. Al-Rubaysh plays a key role in operational planning for the terrorist group and provides justification for their attacks. He’s also made public statements on more than one occasion calling for war against the United States. For these reasons, there’s been a $5 million reward offered since October for information that could lead to his capture.

The problem is not the terrorist per se, or the State Department’s decision to place him on the global watch list; it’s the fact that the U.S. already had him once—and let him go.

Hundreds of Gitmo terrorists have been discharged over the years under a program that started with President George W. Bush and continued full-throttle with this administration. Intelligence report after intelligence report has revealed that many rejoin terrorist missions after leaving the military prison. In fact, Judicial Watch has been reporting this for years. Back in 2010 JW wrote about a report that the Director of National Intelligence gave Congress documenting that 150 former Gitmo detainees were confirmed or suspected of “reengaging in terrorist or insurgent activities after transfer.” At least 83 remained at large, according to the document.

Now we learn that the U.S. government is secretly admitting that it erred in at least one case, the release of a Saudi national named Ibrahim al-Rubaysh. In late 2006 the Bush administration repatriated him back home under a Saudi Arabian “rehabilitation” program that supposedly reformed Guantanamo Bay jihadists but instead has served as a training camp for future terrorists. In fact, in 2008 counterterrorism officials confirmed that many of the terrorists who return to “the fight” after being released from U.S. custody actually graduated from the laughable Saudi rehab program, which started under Bush and continued under Obama.

It turns out that al-Rubaysh is the poster child for the Saudi rehab’s failures. He’s a dangerous Al Qaeda operative based in Yemen and now, years after freeing him, the United States wants him captured.

As Judicial Watch noted, this is not exactly the first time former Gitmo detainees have rejoined the fight, no matter what type of rehabilitation programs they’re placed into upon release. And yet, this administration seems to have learned nothing. By releasing more and more Gitmo detainees, they’re continuing to place politics ahead of security concerns.

Just over the weekend, for example, four Afghan detainees were released, bringing the number down to 132. Many more transfers are expected in the coming weeks.