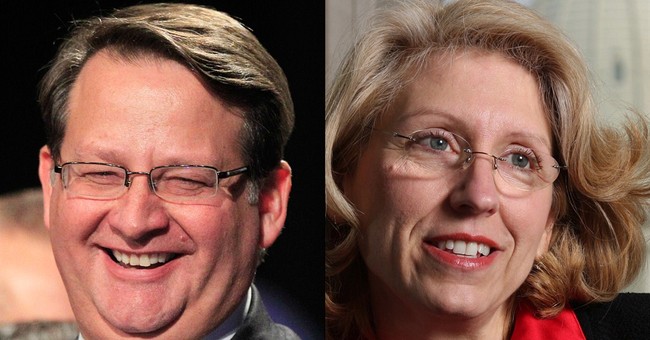 We’re 27 days away from the election, and with polling of Michigan’s Senate race consistently showing Democratic Rep. Gary Peters ahead of Republican Terri Lynn Land, the NRSC has pulled the television ad spending it had reserved in The Wolverine State for the final two weeks of the race.

"No one should be surprised to see us make a significant investment in this race in the coming days and weeks. However, right now the other outside allied groups have Michigan well covered," Ron Bonjean, a consultant to the NRSC Independent Expenditure Committee, told The Hill. "We will be making more decisions on the race during the next four weeks and strongly believe Terri Lynn Land will be a US Senator on November 4th."

Although Bonjean told The Hill the NRSC is watching the race closely and that Land “has an excellent chance to win,” Republican strategists say the former secretary of state has struggled, which is evident in the polling and some suggest by the fact that the NRSC is pulling more than $850,000 from the state to focus on other races. The NRSC contends, however, that the decision was made because she has a cash advantage.

An NRSC strategist argued the move was made from a position of strength, pointing to Land's cash edge, and said that the official Republican Party will remain invested in get-out-the-vote operations in the state.

"Terri Lynn Land's fundraising prowess over Gary Peters plus the public support from multiple groups is allowing us to shift TV resources elsewhere for the moment while continuing our investment in the campaign on the ground," said the source. "The ground game and turnout operation in Michigan is already one of the strongest campaigns in the country."

Though Peters has had a lead in the polls, if spending is any indication, Democrats are taking her candidacy very seriously. As the Washington Post’s Jennifer Rubin points out, “whether she wins or not Land is running a textbook campaign and making Democrats sweat and spend money in what should be a slam dunk race.”

After all, heavily Democratic voters in Michigan haven’t elected a GOP senator in more than 20 years.